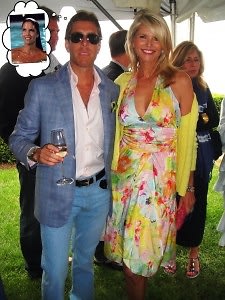 [Justin Ross Lee's personal photo of him and Christie Brinkley in the Hamptons. Photoshopped, of course]

You probably remember the Introduction to Justin Ross Lee we did a couple of weeks ago right here. How could you forget? Between his "Jew-jetting", bottle-popping, and love of over the top antics it's hard to push out of your mind... or the comments off our site. So we checked in with JRL to see what he was up to the other day via a brief message on Facebook (his choice medium). To our surprise, Justin was ready and willing to provide GofG with more information about himself - even things we never asked for. Including this one-on-one interview he conducted with himself, and sent to our editor. So in case the intro to JRL wasn't enough to get a full picture of exactly what this character is all about, sit back and enjoy him answering these questions.... that he asked himself including things like which hamptons nightclub has a door entrance that is big enough for his head. HAPPY FRIDAY!

Do you have a job?

I’ve become my job, as self employed as I am self absorbed.

How many people do you have in your cell phone?

At press time my iPhone’s rolodex is complete with 847 numbers, including Pauly Shore, Sammy Sosa, Mystery (the pickup artist), Doug Parker (the CEO of US Airways), and Alfonso Ribeiro (Carlton Banks). I also have some important numbers.

What do you like so much about going out?

“Going out” is a salacious social contact sport sponsored by Grey Goose and Planned Parenthood. I put in a 40 hour work week. It’s also a great drunken way to collect numbers from 20-something’s (which are useless until I have a daughter pledging a sorority at Indiana). 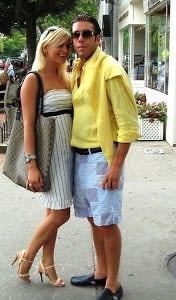 What do your parents think of your lifestyle?

My mother has an overwhelming concern that I will inevitably “knock up a shiksa”. This is clearly showcased in one of my facebook videos: “Interfaith Dating: Motherly Advice”. My father thinks my lifestyle is easy because he’s never had the opportunity to text a woman into sleeping with him. My mother doesn’t know how to text. I once sent her a message that said “Testing”. She flipped out, thought her Nokia was challenging her, and almost threw it in the sink.

Where do you stay out here? (why are you a Hamptons expert)

I’ve never learned to ½ or ¼ share. In fact, I’ve never even had a real threesome except for one yenta with a split personality. This is what makes me an expert, the fact that I live out here: weekend-season long. Some of these lavish share houses end up looking like the Super Dome after Hurricane Katrina hit Great Neck. My family owns a house in East Hampton and I invite my closest confidants out for the weekend. The kind of friends who assist my mother in waving the broom for our “Sunday Morning Shiksa Send Away” ritual, also brought to you by Grey Goose and Planned Parenthood.

Are you banned from any places in the Hamptons?

None yet, but I do have lifetime bans from: Restaurant 212, Pastis, Terminal 3 @ Newark Int’l Airport, Best Buy in Chelsea, 1OAK and any Time Warner customer service location.

What are your favorite clubs and why?

Don’t really get “Axe” lounge this season. Dune was a great brand. Why the format change? If any club should sound like it’s sponsored by a body spray, it’s Pasha, not Dune. Dune smells like worn-out Louboutins, melted swiped plastic, and regret.My favorite club is without a doubt Pink Elephant. It is consistently consistent and always a great time. The waitresses are hot and have the least “-tude”out East. Any venue in the Hamptons is only as good as its human capital. Stephan, who runs the door, makes sure to let the right people in. Also, Pink Elephant has finally moved the entrance from the front to the side, equipped with a larger door for my head.

What are your favorite bars and why?

Nello is a great option for when your African American Express has gone straight to your head. Love Stephen’s Talk House. Been going there for years. It’s great to see Billy Joel stop in unannounced, play a song, drink and attempt to drive home. But my favorite spot is Cyrils in Amagansett. B.B.C.’s w/ floaters and over the hill 30-something’s with caked on makeup and 50 cents of every ex-husband dollar earned make for a lucrative afternoon.

What are your favorite things to do during the day here? (tennis, lying by pool, being hungover, whatever)

What are the best places (clubs, beaches, bars) for picking up women?

“Neptunes” for the tramp-stamped tanning salon employee, “Vinny where’s my cheese balls” rims on a ‘01 CLK 320 time of your life. Never actually been there. Does this place even qualify as Hamptons? Isn’t it on the other side of the Midtown Tunnel?

What happened during your craziest weekend in the Hamptons ever?

When the statute of limitations pass I am pleased to answer. Until then, I plead the 5th.

How many women have you slept with?

One standard deviation +/- from the square root of the year of Gettysberg Address. If you know what this means, you’re not qualified to sleep with me.

Do you have a go-to strategy for picking up women?

“Hi, I’m Justin” does the trick. Otherwise, I consult my friend “Mystery” from VH1’s “The Pickup Artist”. I like to think that I’m self taught, but he has shown me a few pointers when we’ve gone out.

What are your standards for hooking up vs dating vs girlfriend status?

Do you have a girlfriend?

Negative. Not since the Rabbi’s Daughter have I had a girlfriend. Girlfriends are to owning as dating is to renting. In this economy it’s prudent to rent and remain in a cash position more flexible than any girlfriend I’ve ever had.

Will you ever marry?

Absolutely! And if all goes to plan, my future ex-wife is due to be born sometime late this year.

If so, does she have to be Jewish?

As long as she understands what “Sitting Shiva” is, and why my mother is doing it in my name, it’ll be Kosher.

What we don't understand, JRL, is in between dodging Yentas, being BFF with Stephan at Pink Elephant, chumming it up with VH1 reality TV stars, thinking up original pick-up lines, trying to make American history sexy, endorsing Grey Goose and Planned Parenthood... whenever do you get the time to do an interview with yourself?! Phew. We're just tired thinking about it!