[Brad Pitt and Justin Ross Lee in LAX Airport. We're just as confused as you are] It's not too often that our hearts go out to Hollywood, but now is one of those times. Apparently not every movie star and mogul got the memo to be on the look-out for one JRL when they booked their trips to LAX and JFK because the self proclaimed "Facebook celebrity" has struck again it seems... And this time it's even worse than poor, little Ashley Olsen. Looks like JRL reached the big time with none other than Brad Pitt. Yes, ladies and gents, our very own Justin Ross Lee was seated by Hollywood Royalty on his most recent flight. It's still unclear as whether or not Brad recognized JRL as the culprit who snapped the offending pics of the snoozing Olsen on the infamous plane ride previously, but we have a feeling he had no idea. He has better things to do than read tabloids, like adopting children and being Brangelina. The thing that worries us though is the status update that accompanied the picture on JRL's Facebook:

Justin Ross Lee spent 6 hours JewJetting with Brad Pitt, who won the "fuck you" lie-flat Transcon seat selection lottery being seated next to JRL. Inflight pics and video to come. Ashley Olsen who?

No, not the part where JRL thought Brad Pitt was priveleged to sit next to him. Are you really surprised by that? (We aren't). The part where it says there are MORE inflight pics and video to come is what really worries us. What did he do to poor Brad is what we're wondering? Take pics of him sleeping? Caption them with "Now I know what it's like to be Angelina and sleep with Brad" like I did with the Olsen? Is JRL now sporting a video camera everywhere he goes to creep on celebs, TMZ style? Only time will tell. But hey, JRL's got to make a living somehow. How else is he going to pay for all those bottles and "jew-jetting" tickets... right? 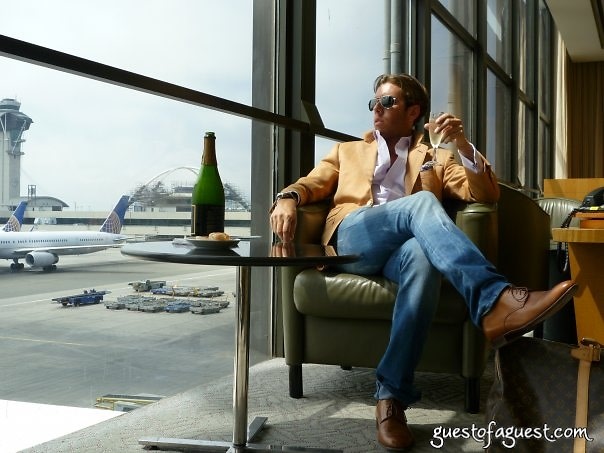