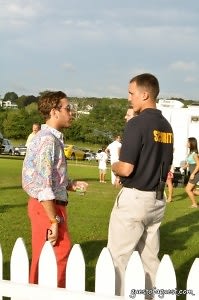 [Justin Ross Lee gets the smackdown from security. Picture by JT WHITE] I have a confession to make. While I have made the acquaintance of Justin Ross Lee before, it was pre-posting days of his antics. I hadn't "formally" met JRL besides our brief Pink Elephant run-in in the Hamptons, so when he made a point to introduce himself to me at the closing day of the Mercedes-Benz Polo at Blue Star Jets Field this past Saturday, I knew I was in for a real treat. Wearing coral pants and an over the top paisley shirt, oversized Star-of-David necklaces nestled in his chest hair, JRL filled me in on how he was banned from the polo grounds. His VIP access bracelet? Put on by himself. According to what JRL told me, this was a result of a picture he posted on his Facebook that we re-posted on the site of him and Star Jones, that was photo-shopped in typical JRL style. Taken at the opening day of polo, the now infamous pic of him and Star was snapped after they had both been interviewed for Plum TV. Pre-posting it, he photo-shopped a picture of "Devil Dogs" snacks above Star's head...

While I was a bit confused at how he could swing entry into the grounds if he was banned, he spent half of our conversation being on the look-out for security. Seems he had good reason to be paranoid: "I'm now also banned from Strategic properties, Marquee, Avenue [because of Ashley Olsen], and Tao in Las Vegas", says JRL, because of Star's current anger to the Facebook personality. On top of this, apparently the former View host didn't find her cake-hat amusing, and Justin got himself into a bit of a jam: "Star made it clear to Polo administrators (Noah Tepperberg) that 'it's either him or me' and insisted that I vanish into a black hole and be thrown out of orbit from future Polo events", JRL added.

In regards to Noah Tepperberg, Justin Ross Lee also had to say this: "Instead of approaching me himself, he cowardly called over a senior member of his security staff and began screaming at him as to how I was able to walk right in after all the JRL briefings and emails going around at Strategic Group," as well as "Unfortunately I didn't catch Noah on a good hair day... I was quickly approached by 4 security guards, one who was undercover, and told that I must surrender my polo bracelet and leave the property." Hard to believe? The proof is in the pictures (and our conversation). Besides, it's JRL. Anything is possible.

Sidenote: My favorite part of my conversation with Justin was when I told him I felt our posts about him had created a "monster". He replied "No, they just discovered one." 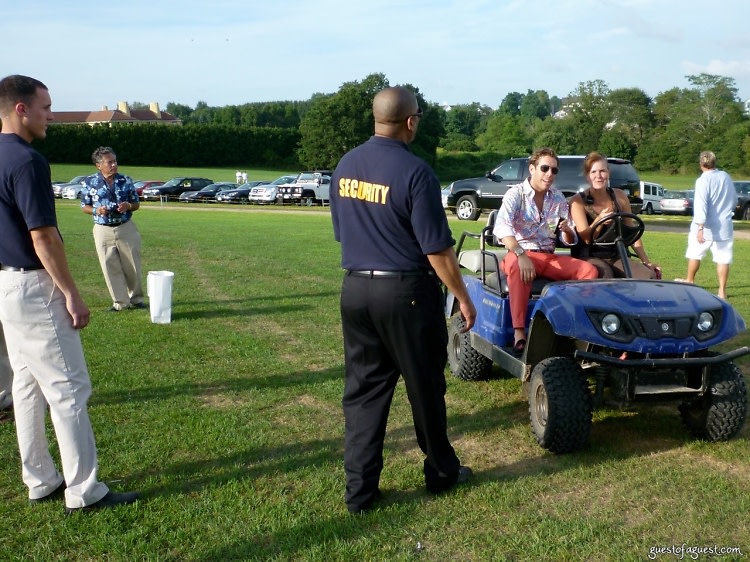