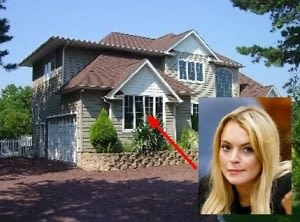 UPDATE: Lindsay Lohan's birthday party will NOT be held at the Stadium Red Estate. AND Curbed's investigative reporting proves to be a fallacy, as "Gay Boobs Manor" is not the correct address of the party, since the true Stadium Red Estate is not in Southampton.

Previously, Curbed Hamptons reported how Lindsay Lohan is planning to head out east for her birthday this weekend and did a little research on the Stadium Red Estate where she was supposedly planning to throw her birthday banger. According to foursquare, the place is also known as "Gay Boobs Manor". Turns out that's not the case, but "Gay Boobs Manor" is still for sale at least!

Should this strangely nicknamed estate strike your fancy, you're in luck because it is for sale, listed at $1,395 million. In the meantime, this only makes me more excited for the inevitable shenanigans that might possibly ensue there. 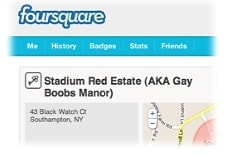 Maybe foursquare will give us more check-in points for this place? Here's to hoping!