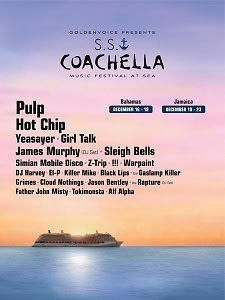 So, um, we can't exactly claim that we saw this coming, but it looks like we'll be getting Coachella back into our lives a bit sooner than we expected, with a killer mini-lineup led by Pulp, Hot Chip, James Murphy and Sleigh Bells. But before you start booking hotels in Palm Springs, we should probably tell you that it's going to be a little different. Like, "on a cruise boat going from Florida to Jamaica" different. Read on for the full lineup and details!

Yes, just within the last hour, Goldenvoice has announced the first-ever S.S. Coachella, which takes a miniature version of the killer lineups Coachella is known for and throws it on board the Celebrity Cruise Lines vessel Celebrity Silhouette. Well, technically two cruises, as eager music fans will be able to choose between a 3-day Bahamas option, running from Dec. 16-19, or a 4-day Jamaica option from Dec. 19-23. Both cruises will presumably feature the same lineup, which in addition to the headliners listed above also includes notable acts like El-P, Gaslamp Killer, Girl Talk, and Yeasayer. And the boat is one of the newest in Celebrity's fleet, with on-board amenities like shopping, nightclubs, a casino, and a hotel-style pool deck.

So this all sounds pretty cool, right? I mean, Pulp as a headliner is unbeatable, and the rest of the lineup, while fairly electronic in nature, seems to eschew the big-name house/techno button pushers in favor of a more interesting and diverse sound. And we're assuming that the relatively small lineup is a reflection of the somewhat more subdued nature of being on a cruise, with the shore excursions and relaxation mixed in to make the whole thing far, um, healthier than 3 days in the desert.

But if you want to be a part of this, you'd better have some cash and some free time– the cheapest (double-occupancy) rooms start at $500 and go way up from there, and since the cruises both leave out of Ft. Lauderdale, you'd better work r/t airfare into your budget plans. And you'd better decide quickly, as tickets go on sale on the S.S. Coachella website this Saturday, July 21, at 10:00 a.m. PDT.

We'll have more details as they become available, but this is definitely out of left field, and pretty interesting, we'd say. What do you think?