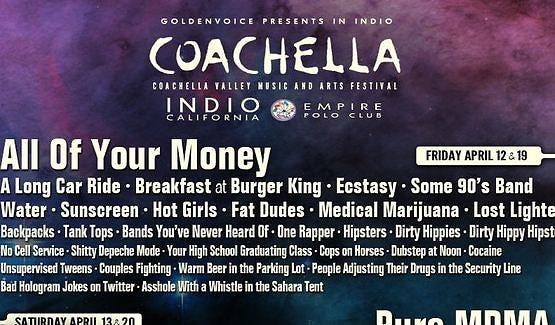 Well, I guess we shouldn't be surprised by this, given Goldenvoice's clear intent to make Coachella 2013 a topic of discussion every week between now and next April, but I guess this is still a big deal: it appears that we already have the lineup for next year's Coachella. Sure, I can see how you might be skeptical, given that it comes to us via noted less-than-serious website Funny or Die, but take a moment to read it over after the jump. If you've ever been to Coachella (or even just heard your friends' endless Coachella stories), I think you'll agree it's just too accurate to be a forgery.

[Coachella 2013 Lineup via Funny or Die]