If you're having one of those perfect, optimistic days that restores your faith in humanity, you might want to skip reading this. Or don't, because after the news broke late last night that the L.A. Beerathon has been shut down by the Grinches at the California Alcoholic Beverage Control, I just don't know what to believe in anymore. Last night, an email went out to the press announcing that the CABC had ordered Beerathon organizers to cancel the event based on a statute prohibiting bars from holding an event where beer was disbursed for free. This morning, all Beerathon hopefuls, myself included, received an email informing us that the event was cancelled and we'd all be refunded our $55 entry fee. 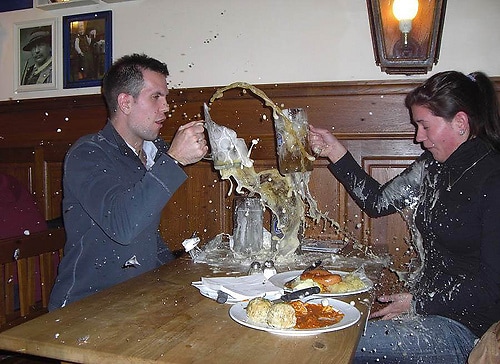 Words really can't express how I feel today. As you may already know, I've been training for the Beerathon with the intensity of a young Randy Moss, if Randy Moss were a degenerate alcoholic with a weird fear of penguins. To find out that I don't have anything to train for less than 48 hours before my supposed moment of glory is devastating. I am now an elite beer drinker, a title I fought for, in a state that has callously proven that they do not care for elite beer drinkers. I think I'm going to turn off all the lights and cry for a while.

Now, there is another side to this story worth mentioning: the CABC has released their own response to the Beerathon organizers' statement, where they say that the issue at hand was not actually about "free" beer, but rather the simpler matter of liquor licenses. According to an ABC spokesman quoted on LAist, the Beerathon would have had to obtain a license in order to organize the event, and they never did. While it's not really all that difficult to believe that a pub crawl promoter might not be the world's most diligent at applying for permits, this was a pretty big event, with over 4,000 registered participants and corporate partners. It's hard to believe (and spokesman/organizer Sam Gelin stated as much) that lawyers were extensively consulted and didn't anticipate this conflict.

Bottom line, who knows, and who cares. The Beerathon is dead, and I'm going to have to settle for drinking 26 Coors Lights in my backyard like it was any other Saturday. That said, if you're dedicated to the idea of getting sloshed downtown, Caroline On Crack has done a decent job of highlighting which bars are still offering food and drink specials.