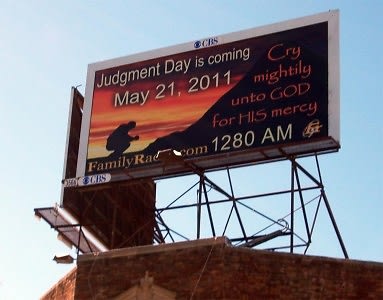 [This billboard promoting the end of the world can be found on the corner of Santa Monica Blvd and Highland via] So here's a likely scenario: you and you best buds are in the middle of a harmless, drug-fueled pansexual boner party on the streets of West Hollywood. Things are heating up, and you're juuuust about to call your local Planned Parenthood to see if you and your friends can get some 'just-for-fun' abortions afterward, when all of a sudden you feel a strange, unfamiliar feeling: guilt. You look up to the sky, and there, reaching up to the heavens, is a message—Judgment Day is coming. Like, tomorrow. Looks like you have a lot to make up for. 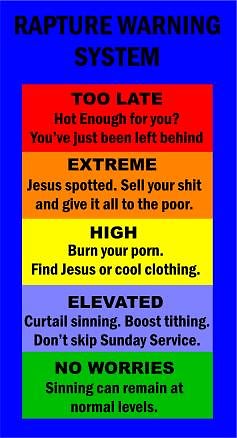 By now, this whole 'May 21 Rapture' thing has become a full-fledged societal meme, with even respected, non Jesus-based news outlets like NPR giving something of a platform to this incredibly specific crackpot theory, and the incredibly specific crackpot who dreamed it up: Harold Camping, the 89-year-old owner of Family Radio, a network of religious radio stations. See, ol' Harold figured out that everyone else that ever read the Bible, ever, didn't really understand what they were looking at. According to Harold, who must have really enjoyed The Da Vinci Code, there's a whole hidden numerology system in there, which, when properly examined by an incontinent 89-year-old retired civil engineer, reveals the exact date of Jesus' return to Earth, the rapture of the 200 million True Believers up to heaven, and the destruction of Earth and all the rest of us who are left behind. Let me retiterate: this is supposed to happen tomorrow.

Now, before you fall into despair and start desperately trying to make up for the last 25+ years that you've basically lived like a soulless, hedonistic social parasite, there's a few things to consider here. For starters, Harold's been wrong before. Oh, did we forget to mention that he already predicted The Rapture 17 years ago? That was silly of us, but probably even sillier of him, in 1994, when he said the world would totally end on September 6. Then he said his calculations were slightly off, and it was September 15. Then September 24. And so on, leading us to believe that Harold plans to just keep predicting the end times in three-day increments until his personal end time, which, based on his age and robust physical appearance: 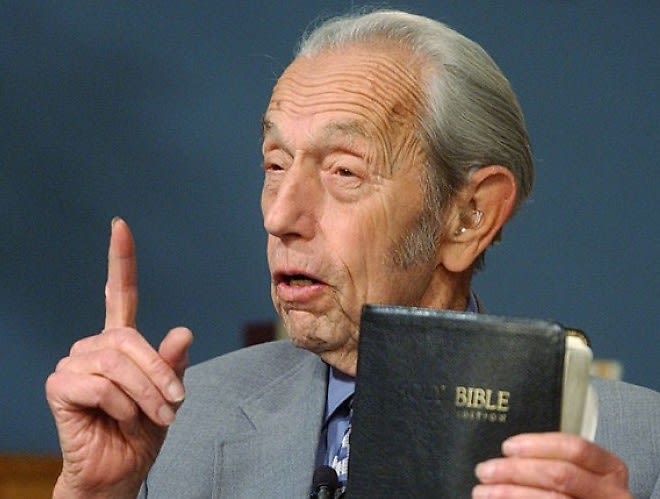 Harold Camping via [Editor's Note: Those fingernails are HORRIFYING!]

-will probably happen before BP drills to the Earth's core, or Kim Jong-Un sets off a nuke because he wanted to see the Grizzlies in the NBA Finals, or any other number of Apocalypse scenarios that are 100,000,000 times more plausible than "the return of Jesus."

But hey, even if you're a Believer, through and through, and you trust Harold Camping when he says that his dates are accurate this time, for realsies, you might want to take a step back, because as shocking as this may seem, Harold himself isn't exactly behaving like a guy who thinks the world is actually ending tomorrow. How is this, you ask? Well, he's still taking cash and credit card donations on his website: 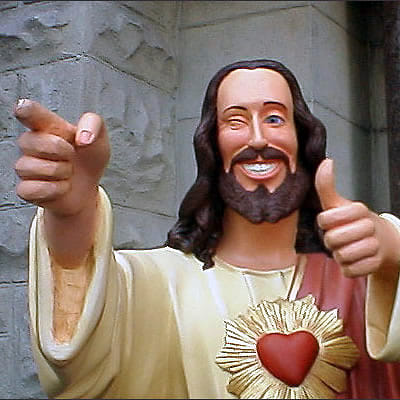 -and people (including national treasure Roger Ebert) are reporting that Harold has turned down a straight offer for his car and house. It's almost as if he's not totally confident that he'll be sharing a sizzling Fajita skillet with J.C. at the Chili's in Heaven tomorrow night. [Photo via]

So what should you do tomorrow? Well, for starters, check our event calendar: if, for some reason, it still ends up that it's really going down, you're not going to want to be alone, watching Hillbilly Handfishin' on the History Channel, wondering how many times you can masturbate in a single day before you have a serious issue. Greet the end with some social good cheer. And, since the chain reaction of earthquakes and volcanic eruptions is set to kick off at 6 pm PST, according to Harold's super-scientific calculations, you and your buddies can have a fun little countdown party, or attend one of the many already planned. Here's a good drink recipe!

If, on the other hand, you're a God-fearing, devout individual (who was somehow steered to our website by accident) and you expect to be vacuumed up to the pearly gates in God's Mighty Dustbuster tomorrow evening, we recommend gathering in a large, open, outdoor space. You're not going to want to have to crash through the ceiling during the Rapture. Also, if you're an airline pilot, bus driver, or any other occupation where your sudden disappearance will send a vehicle full of people into a brick wall or over a cliff or something, maybe do us sinners a favor and call in sick?

Most importantly, if you have a pet, make sure they're taken care of! As our New York site touched on, several, and I'm being serious here, several different businesses exist to care for your pets once you've been Raptured off of the planet. Don't let Poochie go hungry just because his little heart can't accept the love of God.

Enjoy the Rapture, everybody!