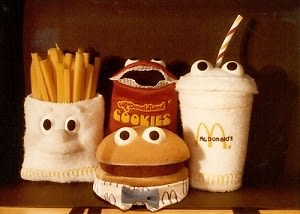 It's true in some places, like Santa Clara county, McDonald's Happy Meals are ILLEGAL.  It's the end of an era for a hallmark of many of our childhoods.

Local officials feel that the toys included with the meals create an incentive for kids to eat unhealthy foods and decided to do something about it.  A bill proposed to make McDonald's Happy Meals and other fast food kids' meals illegal was passed this week, despite opposition from the fast food chain executives and franchise owners who say they've been "promoting healthy choices for kids like salads, apple juice and low-fat milk." Except those really aren't healthy choices, and in some cases are even worse than the fried fare we love, with salads being among the greatest offenders of fatty foods in disguise.

This is a step in the right direction for trying to take this really embarrassing obesity statistic by the balls, but do you think taking kids meals off the menu will affect children's desire for those golden McNuggets of joy and wonderfully salted fries they've mastered? We think yes, but not by much.  There's much humor in the debate over whether this sort of bill oversteps the boundaries of a parent.  Firstly, parents can still take their kids to get fast food if they want, they'll just have to order off the regular menu now. And you have to appreciate the hilarity of the people who are so passionately opposing the ban.  "What's the world coming to when you can't even get a Happy Meal?!" ...Uh, less fat? Fatty.

Enjoy this clip from ABC News which breaks down the details of the Happy Meal ban: