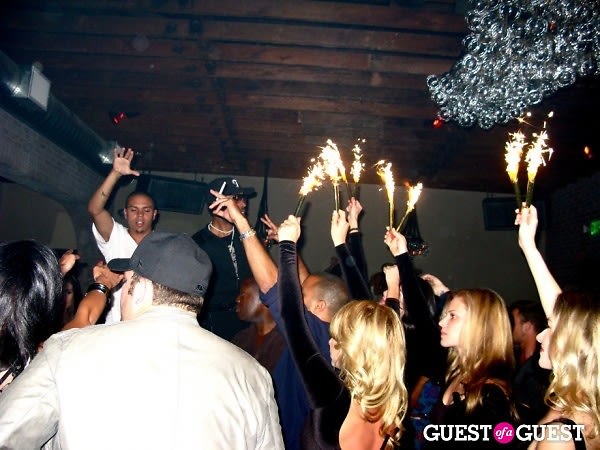 Normally, I love the daily discounts from Gilt, or GroupOn, or one of the other 2,000 deal email services: who doesn't like getting $40 worth of food for $20, or a year's subscription to Juggs for $10, or whatever? But what I saw in my email today made me shudder: a discount on a VIP table and bottle service at Bardot. This is bad.

Now, before we get too far into this, let me say off the bat: I am not about to argue that bottle service is somehow a sacred privilege, or that people who can't normally afford bottle service are worse than those who can. In fact, it is these people whom I am trying to save. 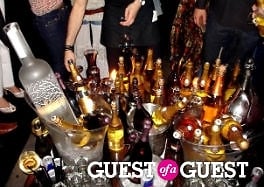 You see, like all great human innovations, bottle service is often one of our most important warning signs, to identify desperate people trying to spend their way into relevance. In the days where "clubs" were actually, well clubs, with membership lists and exclusive clientele, bottle service was a way that the inordinately wealthy could buy their way into what was otherwise a completely closed-off social experience. If you were in the club and you didn't have bottle service, that meant that you had some other reason for being allowed inside, like you were famous, or gorgeous, or you had some really awesome cocaine. Having to sit at a table next to the bottle you paid a 2000% markup for branded you as the least important person at the party, not the most.

But clubs aren't really the same anymore since the invention of the fog machine, and now that most clubs are, at least in theory, open to the general public, bottle service has become not just a way of buying your way in the door, but a way of up-jumping the social stratification that takes place within the party itself. Maybe you got inside the front door, but if you're not in the VIP section, you're still outside. So maybe if you're rich, you buy yourself a bottle- it's a surefire way to get some attention from the floozies, chat up a offensive lineman or a bass player or something, and make yourself feel like King Shit for the night. In other words, bottle service is often a way for rich people to also feel like important people, which, of course, feeds into the system that makes them feel unimportant in the first place. 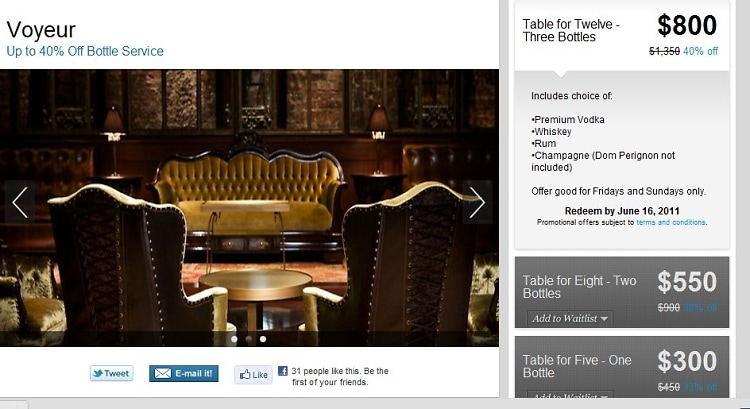 Offering GroupOn discounts for bottle service defeats the usual purpose of bottle service, which is to broadcast how much money you just spent. I know this because I know that if the GroupOn specified that you'd be sitting in the special "GroupOn" section, which was just as good as the other tables except that there was a giant sign telling people that you saved 50% on your bottle, almost nobody would do it. Nobody wants to look cheap, but if there's suddenly as many bottles purchased via GroupOn as not, the balance shifts, and everyone looks cheap, regardless of what they paid. 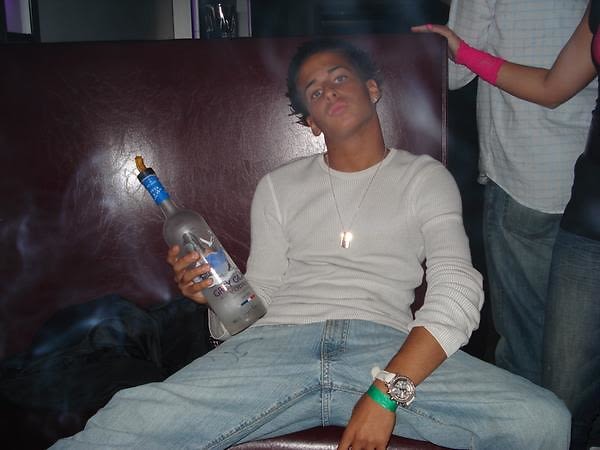 Of course, not every single bottle in the history of bottle service was acquired for douchey means. If you're going out in a large, self-contained group of friends, buying a bottle insures you a seat and a modicum of privacy. Of course, you're still at a club, so you're still not going to be able to, say, hear or talk to your friends, but I suppose I get it, and in that situation, you probably wouldn't complain about getting a discount, either. But if you're trying to celebrate a birthday or have a night out with a big group, aren't you really better off going to a nice restaurant, or a lounge-y bar where you can actually interact with the people you're with?

So people, heed my words: think twice before spending your hard-earned money on bottle service GroupOns. You're chasing a concept that largely doesn't exist anymore, and you're perpetuating the system that, 49 times out of 50, keeps you in the corner. If you want to feel like a VIP, figure out a way to hang with the actual VIP's, or better yet, get out into the party and meet some people your own age. And maybe stay away from Voyeur altogether.