Oh, how I love the local news. When our ABC affiliate reported this video capturing SpongeBob SquarePants getting his ass whopped by two class act ladies in broad daylight on Hollywood Blvd, they probably thought the beatdown was the highlight of the segment. But the real star of this compelling piece of journalism are the edited reactions of the locals.

My personal favorite? Gosh, so many to choose from but I think it's got to be the incredibly tasteful, choice clip (at 1:45) of a little Asian woman who says, "Ah, reeelleee??!" in utter confusion and amazement of Hollywood Blvd Elmo's arrest—the full extent of her airtime. Raising the bar of completely abandoning sense of responsibility to be PC about it, I love it. I'm also a fan of the part where they get the long arm of the law to weigh in on this pressing issue with the police officer's comments on the incident. You know after the cameras were off he totally gave everyone his headshot and called his agent crying. 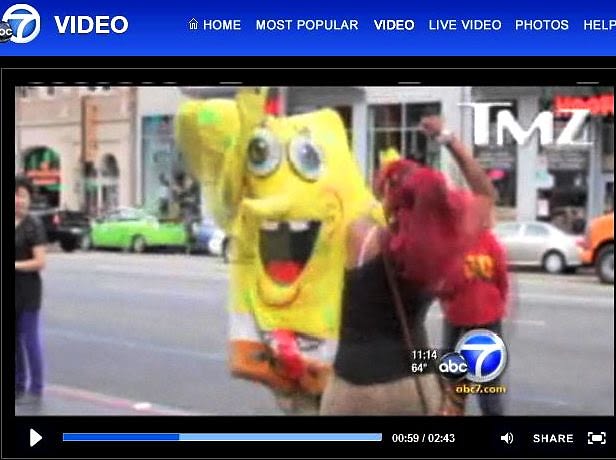 The entire thing is so beyond absurd, from the two peaches going full savage in the middle of Hollywood Blvd with their pink hair and USC sweatshirts, to SpongeBob as the victim of this vicious attack, to the shamelessly edited reactions of utter outrage of our fellow Angelenos, it's so jarring while watching as you remind yourself this is actually real, this is not a joke. This is your local news report. This is you reality. Welcome to Los Angeles.