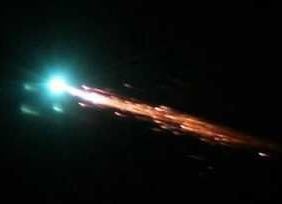 On a list of the largest threats to the city of L.A. (a list that also includes earthquakes, SBE, and Shia LaBeouf), our city's most constant source of danger would have to be aliens, right? I can't even flip channels without falling on some loud, crappy Aaron Eckhart movie or whatever about martians nuking Santa Monica, so surely this is something we as a general population should take seriously, right? That seems to be what people thought as an honest-to-God spaceship was widely spotted streaking across the Southern California sky last night. Y'know, unless it wasn't a spaceship.

See, despite obvious evidence that this yellowish-green, incredibly bright moving object was probably the advance scout for a whole fleet of sinister aliens who just watched Independence Day for the first time (it takes a while for the DirecTV signal to get out to Mars) and got a bright idea, our government officials are kind of throwing a wet blanket on the idea. Air Force, NASA, and local Fire Dispatch officials have all reassured LAT that it was most likely a fireball, either a man-made orbiting object or a small meteor that burned up entering the atmosphere.

But that company line doesn't fool our town's most intrepid tweeters. Let's see how they reacted:

Hi-oh!!! It's okay if WeHo Daily makes a joke like that, even though I might get in trouble. Besides, it's obvious it's just a joke. What self-respecting WeHo fashionista would get on a tacky, yellowish-green spaceship?

An excellent question. I hear a bunch of the basement meth labs open their doors on the last Thursday of the month for an art-walk kind of thing, but the timing's wrong.

There's about 2200 different versions of this joke on Twitter. So I chose one.

Well Deena, the good news is, you're not crazy. The bad news is, it's not exactly what you think. Syphillis causes hallucinations.

[top photo via, all tweets linked to source]