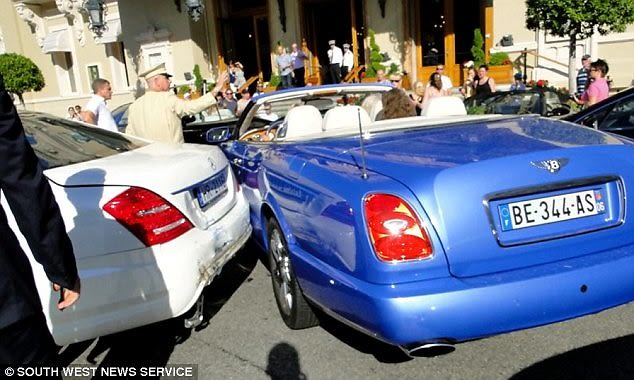 When I was in junior high school, my mom backed into a bus. We had just picked up some pizzas, and she was backing out of the parking spot, and we went right into a gigantic city bus that was waiting at a light behind us. While she exchanged insurance info with the bus driver, I had to sit there while every passenger on the bus just stared at me like they wanted to kill me. Needless to say, I was embarrassed, but then a story like this comes along, and I think to myself: at least my mom didn't crash a Bentley into a Ferrari, a Mercedes, a Porsche, and an Aston. In broad daylight. In Monte Carlo. 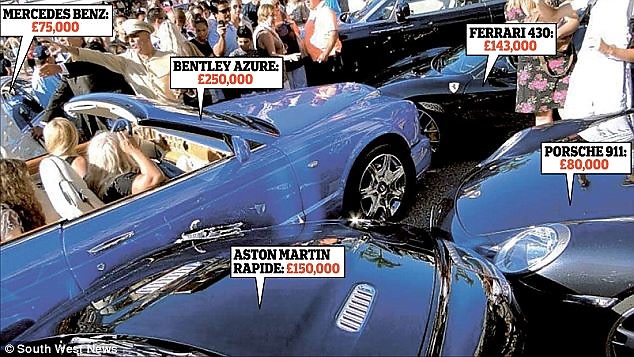 According to Mail Online, who prepared the above handy graphic, the driver of the Bentley, whom they take great pains to identify as a "hapless blonde," was trying to navigate the valet circle outside of the world famous Place du Casino when she apparently got her period or something, scraped the side of the white Mercedes on the left, plowed into the Ferrari, and then was hit by the Porsche and the Aston, meaning $1.2 million of total car was involved in the crash. The article goes on to cite a University of Michigan study about how women get in a disproportionate amount of accidents, and then it ends with a series of domestic violence jokes. Well, I made up the last part, but it was certainly headed in that direction. 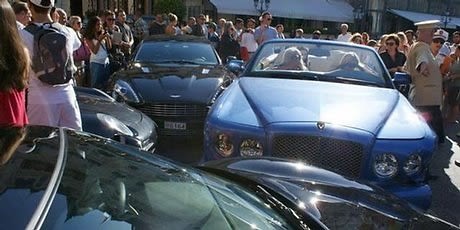 But focusing on tired clichés about the gender of the driver divides us needlessly, when what we really need to be doing is coming together to gloat at the hardships of the super rich. Now, I don't resent anyone for being regular rich, but I won't lie: when a billionaire's yacht sinks, or Tiger Woods gets hit in the head with a golf club, or Paris Hilton gets cooked medium-well in a malfunctioning tanning bed, it confirms that nobody is above the randomness of life, which is reassuring for regular people who get screwed all the time. Can you honestly tell me you wouldn't breathlessly devour the media coverage of The Spelling Manor burning down in a freak vibrator accident, or an e. coli outbreak at the Kardashian wedding?

So let's leave the gender bias aside, and just stare in plebian awe at the amount of expensive metal involved in this hilarious clusterfuck. Luckily for our motorists, the estimated total damage to all cars involved is somewhere in the $76k range, or as any one of these obscenely wealthy people might call it, "a good dinner." Looks like we'll have to budget this vacation a little different; is there a Denny's in Monte Carlo?

[top photos via, bottom via]