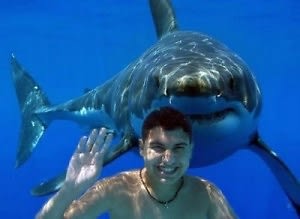 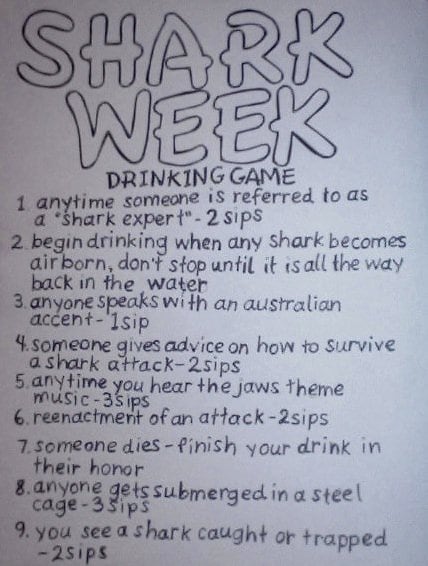 Introducing the Shark Week drinking game, which popped up on Reddit earlier this week. Though the creator of this outstanding document has yet to step forward to receive the public accolades (and/or spelling lesson) that he or she so richly deserves, they can certainly sit back with the satisfaction that only comes from fully indulging the creative impulse.

Yes, whether you're flipping out to the super slo-mo of a Great White going completely "airborn" [sic] or simply listening to the scientific analysis of an honest-to-goodness "shark expert," this drinking game seems to have all the necessary bases covered for you to get good and lit while watching the same five or six shows they've played for the last ten years.

So maybe tonight, grab yourself a few cold ones or whatever your adult beverage of choice is, and give this game a shot. After all, like Christmas, Shark Week only comes once a year.

And just for clarity's sake if the image is hard on your eyes, here are the official Shark Week Drinking Game Rules:

Anytime some is referred to as a "shark expert"- 2 sips

Begin drinking when any shark becomes airborn [sic], don't stop until it is all the way in the water.

Anyone speaks with an Australian accent - 1 sip

Reenactment of an attack - 2 sips

Someone dies - finish your drink in their honor

Anyone gets submerged in a steel cage - 3 sips

You see a shark caught or trapped - 2 sips

[photo via, game via]