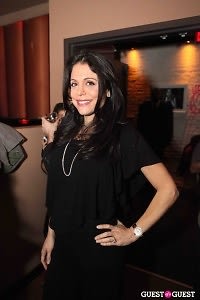 Life & Style is reporting that Bethenny Frankel is in labor! The reality star was due in June, so she's a little early.-

The star of The Real Housewives of New York City and self-proclaimed "Skinny Girl" married her fiance, Jason Hoppy, in March.

This is her first child, but rather than hoping for a healthy baby, the outspoken Bethenny was quoted as saying:

"I hope the way I'm carrying doesn't mean I'm having a boy."