White House party crasher Michaele Salahi might be charging for TV appearances and endorsements these days, but back at the 2008 World Snow Polo Championships in Aspen, Salahi offered her services to for free to Plum TV in exchange for an imagined "two minutes of fame" at "hosting" the event (for which she and her husband failed to pay a $19,500 entry fee). 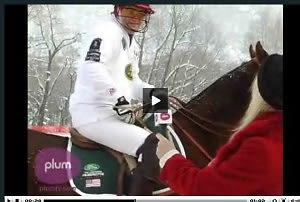 It's a strangely fascinating video. Michaele's blindingly white teeth and platinum hair fade into the snowy Aspen backdrop, leaving that raspy smoker's voice as the only thing to distinguish her. She interviews her husband, Tareq, (left) without ever mentioning who he is or how they are related. (He's the only person other than Michaele to appear in the video, which is either due to editing or the fact that the "polo tournament" took place in a park down the block from the Salahi's, with hobos the couple paid as extras awkwardly mounting horses stolen from jockeys bound and chained in the Salahi basement).

Speaking of editing, Tisch film students will no doubt cringe at the moment when Michaele undergoes a complete wardrobe change (from fire engine red to spearmint green) apparently mid-interview!"This is a rough job," she explains at one point, provoking coalminers across America to disgustedly cough up wads of blackened phlegm.

And of course, there's the moment when Michaele tells the (imaginary?) Plum TV producers that this is her "two minutes of fame." If only.