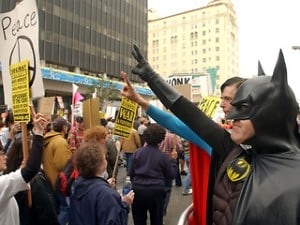 'The Dark Knight Rises' is on its way to New York for filming, and it may well end up meeting up with those protesters down on Wall Street. FUN!

The 'Occupy Wall Street' movement, showing no signs of fading, will more than likely become a back drop to the new Batman movie. Although it is unlikely that any script changes will occur to fully include the protest, the film crew has shown no interest in wanting to divert the protesters whilst they film later this month.

Will This Affect The Message:

Celebrities and that associated with celebrity culture should be included in the 1%, a select few are set to make millions from the release of the new Batman film

'There is no such thing as bad publicity' [via]