1. The Social Network. Like this is a surprise on my list. It opens to the general public today, and I'm more than excited to hear the reaction from people who had no idea there was ever any story behind the founding of Facebook. Also, it's really funny to see my partner, Cameron Winklevoss, on [TMZ] and [Popeater] on the same day! [All Social Network Coverage]

I just had an amazing time at Don Hills for the Gotham Magazine December issue where us 4 girls will be having "Girls Night Out."  The energy was brilliant and every girl was super nice. Look out for Fernanda's new jean line, and Oh Land's new album (which was playing during the shoot!). It was also, (embarrassingly), the first time I was in Don Hills. I really appreciated the writing on the wall. Literally.

3.  "Every Social Network I've Ever Joined." A personal essay of Kelley Hoffman's past 20 years on the Internet -- a coming of age story through compuserve, aol, napster, friendster, myspace, facebook, twitter etc. [Thought Catalog]

4. Rahm Emanuel received a standing ovation in the East Room from the White House staff this morning when President Obama officially announced his departure. He will be running for the mayor of Chicago. [Daylife] Read Howard Dean's farewell here: [Motherjones] Also check out this bromance! [Joyenel] 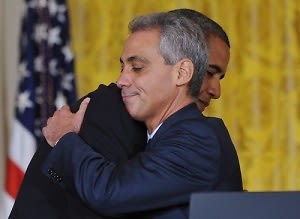 5. As of Midnight, Marijuana was officially decriminalized in the state of California, instantly eliminating over 60,000 arrests each year. [Animal NY]

6. If you got a receipt for your taxes, here is what it would look like: [Washington Post]