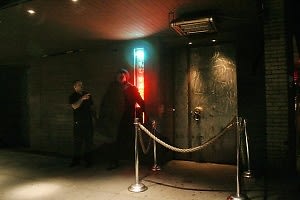 [Disco mans the door at Bungalow 8] Last fall, when Southside first opened, we wondered if Anthony Martignetti's newest role was channeling Amy Sacco. After giving the basement of his Center and Broome St. "Bar Martignetti's" from "Bellas" into "Southside" we noticed quite a few similarities from another hotspot...Bungalow 8.First Anthony swiped Amy's palm trees and black tiles. Now he's stealing her doorman, Disco. Sacco's Bungalow 8, rumored to be closed last week but actually just renovating, has lent its imposing gatekeeper to Martignetti's Harvard-friendly SoHo lounge.

Southside's never had the mystique that Bungalow did in its prime, but maybe this move (however temporary) could boost the cache of the hotspot and the anticipated re-opening of it's upstairs bar to be named "Brinkley's."  No word on the whereabouts of Q, Southside's beloved longtime bouncer, but if Bungalow 8's history on 27th Street is any indication, Disco will bring a seriously tough door and a raft of imitators to Centre Street, which will eventually morph into a well-paved, police-patroled vomitorium.

A quick recap of some other doormen can be found HERE. 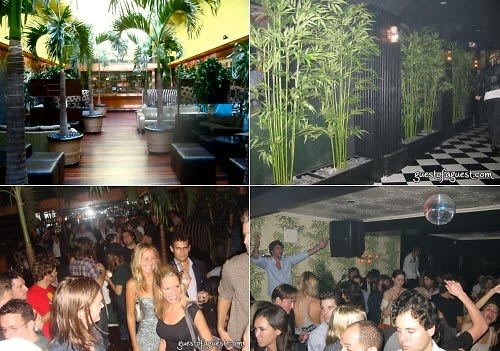 Bungalow 8 on the left columns, Southside on the right.