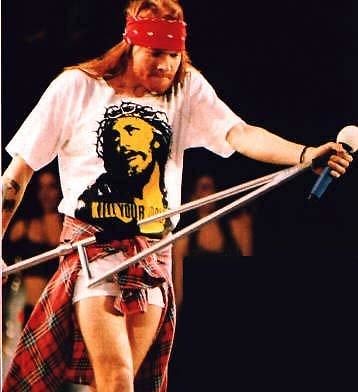 On Saturday night, around 3:30am Axl Rose casually strolled into Bungalow 8, running into no resistance from doorman Disco, who had curiously departed from his normal black garb and was wearing a pastel striped polo button down....and that's where the story ends.  Ok, so we don't really have too much to say about the night, or Bungalow 8, but we love Axl Rose!

Sure we aren't fans of his corn rows, and after waiting over a decade for Chinese Democracy to be released we've lost interest (ok, to be honest we're still interested), but we love his music and, moreover, we love singing Patience at karaoke.  This guy is such a legend, I mean who else can pull off jorts like him?  And GNR is just pure Rock and Roll.  Certainly Axl's ying is suffering from the loss of his yang Slash, but now that he is back in NYC he seems to be doing much better.  That being said, Axl, please stay out of Bungalow's bathrooms and get the heck back into the studio and finish that album, we really want to hear it.