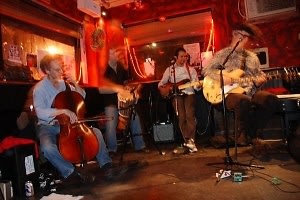 One after another a dive bar closes (Mars Bar, Don Hill's), is in danger of closing (Max Fish), or being shut down or harassed by overzealous cops (everything on LES), and now Banjo Jim's, one of the best spots in not only the East Village, but the city for bluegrass is saying goodbye to make way for....

“We’re going for an urban cottage aesthetic and we’ll open up the windows so you can see the parks. It always smells so beautiful there and we want to work off that aesthetic.”

Tonight will be the venue's last evening, reports EV Grieve, and the sentiments seem to echo those of the locals who regularly took their seat at Mars Bar. Just another part of the old East Village that's fallen victim to the ever changing landscape of the city, cut down by something newer, shinier, and trendier.

Banjo Jim's was full of regulars, offered cheap booze, and lacked pretension. A friend of mine who was just getting started as a jazz singer would drag me there on Sundays where the crowd of fellow open michers would be totally supportive and friendly.  A place where someone comes, performs their one or two songs and then leaves, this was not. Their web site even has 'Feel the Love" in giant red letters on their home page.

The new bar will not have live music, except for occasionally. Ceraso tells EV Grieve:

"We thought it would be great to be able to honor it with an occasional "Banjo Jim's" night of music. We're thinking of something weekly or monthly as well as possibly having some piano and fiddle, etc. for happy hour from time to time."

So take your last chance and stop by tonight before it's reopened with fancy ice cubes and a twenty minute creation time on a $22 drink with bitters and organic ingredients as the James Daniel.