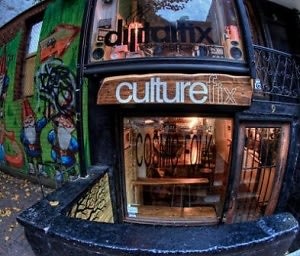 The war between the NYPD and LES bar owners has been going on for sometime. Mason Dixon, Max Fish,  Los Feliz, and Madame Wong's were all shuttered briefly for various violations. Now, one bar has put on the gloves and is fighting back!

Captain David Miller, the 7th precinct's new executive officer, is responsible for the recent LES crackdown, bringing in mounted police and more cops.  He previously worked in Chelsea, where certain crimes like the murder of Jennifer Moore after a night of clubbing and of Laura Garza who was killed by a man she allegedly met at Club Marquee,  may have colored his views.  Somewhat misguided, he has been quoted as saying that the lower east side is  "not a free-for-all. It’s not a Mardi Gras situation down here."

Culturefix, the half boutique/half gallery/portion booze dispensary which opened a year ago, was served with a temporary injunction after underage auxiliary police were sent to the bar. They were given papers on Friday night,  just one business day prior to their scheduled court appearance.

"This court order was an injunction that claimed that we were a public nuisance to the neighborhood due to our sale of alcohol to minors.  But all of those minors were undercover cops, they had no evidence of any other drinking, despite two raids. Never once in those raids did they find someone underage drinking who wasn't a cop."

Culturefix was able to get the initial injunction lifted by the courts, and  denied stipulations such as a $2,000 fine, a security guard on hand at all times with an electronic ID scanner, and an increasing fine for each time a further violation was written. They refused to agree and the court judge found that while the bar did serve underage cops, it was not serving those under 18 on a regular basis. They NYPD and bar must now work out an alternate agreement.

In a way they have already won just for sticking up to a bully in uniform. Culturefix: 1, Police Entrapment: 0.

It's safe to say that the agreement won't be as harsh as the original. Depending on how things pan out, LES bar owners could use this as ammunition to fight back, or the cops could see it as reason to ease up.