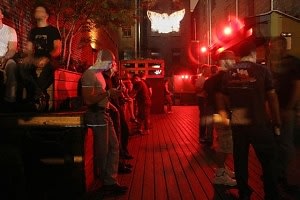 The Eagle, one of NY's most well known gay bars and one of our picks of where to hang out for Pride Weekend, was raided by police and three other city agencies, as well as the State Liquor Authority, on Friday night as revelers came out to celebrate their new right to get hitched.

Was there some sort of violent glitter explosion going down that needed intervention by the cops?  A fatal injury by leather?  Officials say it was part a routine inspection. Hmmmm....

Authorities entered the bar around 10:30pm and stayed between 45 minutes and two hours according to different accounts, turning on the lights and asking patrons to empty their pockets, reports the New York Times.  Robert Berk, the owner of the Eagle, said officials were  “aggressive, but polite." Patrons found it to be a form of harassment.

"I find interesting the timing,” said Mr. Borras, who had been at the Stonewall Inn in Greenwich Village earlier that night. “I would just like to know from the police: `Why did they do that?’ To me, it is a blatant sign of intimidation and harassment, I mean, 42 years after the Stonewall riots and we still have to live in fear of the police disturbing our quiet enjoyment of life? I just don’t understand. We are very peaceful.”

Cops issued six violations, including "unlicensed security," "unnecessary noise," and a "failure to conform" to state liquor laws. Scott M. Stringer, the Manhattan borough president, plans on asking the police commissioner to conduct a formal investigation concerning the circumstances around this raid.

The police are arguing that the bar was slated for inspection through a program known as MARCH and had been scheduled weeks earlier, before they knew people would be out to celebrate the landmark legislation. Paul J. Browne, the Police Department’s chief spokesman, said his force "are not seers; they don’t have a crystal ball that tells them when Albany is going to take up a piece of legislation.”

I's their excuse and they are sticking to it, but it's hard to believe it's merely poor timing when Pride Weekend was planned far, far in advance.