NYC sees its shares of club and restaurant openings all year long. However Fall Fashion week in particular is not only celebrated as the perfect time to launch your hotspot, it's almost a pre-requisite for an immediate A-list crowd to christen your doors. Tonight, after Karl Lagerfeld finishes toasting the fashion elite at his hot-ticket Chanel dinner, his guest will have to decide between not one but THREE different club openings to finish off their start of Fashion Week revelries....

1. The Reopening of the Boom Boom Room.

The "Let's try this thing again" party marks the official re-opening of Andre Balazs' Top of the Standard hot spot (guess that name change never really stuck huh?). Le Bain has been rocking for the younger party set all summer, and last night's party for ex-PMc photogs Billy Farrell and co's new agency had more than a couple guests discussing the semantics of just how they thought the New Boom Boom would work. If it will actually exist as a private club only, if this fashion week will be as pivotal for the space as last years', and if Madge will be rocking out on the small dance floor is anyone's guess. But tonight's opening party (for "friends and family" only of course), will be an interesting starting point. Black Tie! Fancy!

Hot off the successful opening of their see-and-be-seen spot bearing the same name as it's street, Kenmare, this do no wrong duo is ready to bring some more rock and roll to the NYC party scene with their new acquisition of Don Hills. Nur Khan is also ready to revive his "Nur Khan Sessions" with a special live performance by Black Rebel Motorcycle Club. Doors open at 10pm, though this is one of those downtown-rockstar fashion week parties that has that "This is going to be a late night" written all over it. Let's put it this way, you'll be more likely to see the out of place black tie straggler from Boom Boom's bash show face at Don Hills than you will under the tents at Lincoln Center tomorrow morning. Plus, people will have to rest up for the even Bigger Party: tomorrow night's POP Magazine Party hosted by Dasha Zhukova. 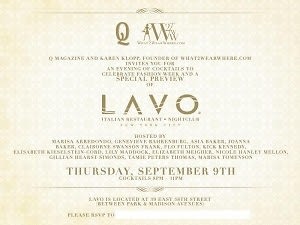 Though the official opening night of the club is this Tuesday,  Q magazine and What2WearWhere.com will be hosting an intimate cocktail party at the Italian Restaurant part of Noah Tepperberg and co's latest mega venue. It may be hard to drag people away from Alexa Chung's cocktail party for Chanel downtown, but those that do brave the scenery of 58th street are sure to give us the scoop on what to expect from the latest Strategic opening next Tues.

[Hot Lavo: Meet The Latest Entry In The Tao/Marquee/Avenue Empire]

Bonus Mention: We are also looking forward to checking in on Lil Andre and his Le Baron project in Chinatown, a sure bet for downtown chic crowd looking to copy their Parisian fashion counterparts in NYC.