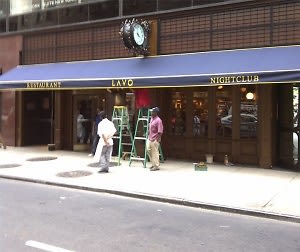 Tao New York has its work cut out for it if it wants to remain the 4th highest-grossing restaurant in the city. Friendly competition arrives across 58th Street next week with Lavo, an Italian restaurant and Uruguayan nightclub from the folks behind Marquee, Avenue and, well, Tao. And just in time for the frenzied venue roll out season that is Fashion Week.

The midtown Lavo is an offshoot of the Vegas Lavo. The Vegas Lavo narrowly edged out the New York Tao as the 7th highest-grossing restaurant in the country, with 2009 sales topping $22 million. That's a lot of fettucini alfredo. Oh, and the Vegas Tao topped that list. In other words, don't expect plastic cutlery.

Co-owners Mark Packer, Rich Wolf, Noah Tepperberg and Jason Strauss expect the usual midtown crowd of Europeans and industrious urban professionals letting loose to pack the 200-seat restaurant. (The bottle service nightclub operates separately from the eatery.) Which is not to say the place is an assembly line. These guys went out of their way to make guests feel special, having invites affixed to a one pound tile hand delivered to those whose presence was requested at Tuesday's grand opening. It's a nice touch, a tangible and permanent record of a newcomer to a digital world and ephemeral business. 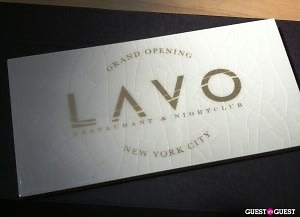 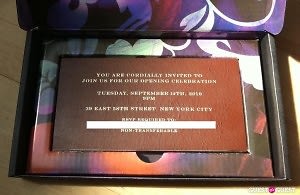 Lavo will likely rev up the nightlife renaissance that is brewing in midtown. And it's nice to see a joint that acknowledges it is a restaurant and a nightclub instead of insisting on some vague hybrid of the two, like at Avenue and Kenmare. But will Lavo emerge on top of the heap of high profile nightspots opening this Fashion Week? Competitors include The Darby, MPD and XIX, a basement lounge that, like Lavo, is attached to an Italian restaurant.

XIX in particular might be out for blood. Travertine's former cook (and Top Chef contestant) Manuel Treviño is making the move to...Lavo. Lavo's Facebook page congratulated Treviño on "jumping to the big leagues."