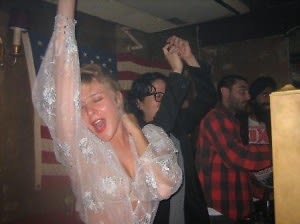 You'll never go to the Beatrice Inn again. It's over, it's been three years, accept it. But while you can't go back, you can indulge in nostalgia.  Someone stole the shuttered club's green and white sign, but one relic is getting a whole new lease on bar life. The American flag, which once hung behind the DJ booth, has found a new home.

The flag has been spotted hanging on the wall at former Bea owner Matt Abramcyk, and his siblings Jack and Anna's, new rustic Americana-themed Tribeca spot Tiny’s & the Bar Upstairs.

The space opened for the first time yesterday and is currently serving lunch in first floor's restaurant.  They will open for dinner May 2, and brunch will begin in June. The second floor will eventually function as a bar and the third floor, which is currently being used as an office, will serve as a VIP room. 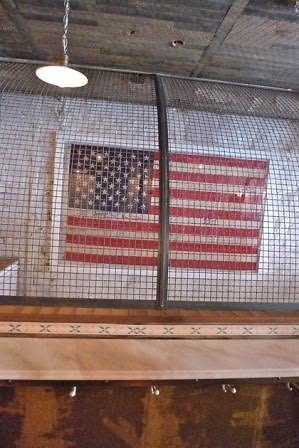 We won't even ask if this could be the new Beatrice, because nothing could be the new Beatrice. It's done. Matt's other endeavors, The Bunker Club, Smith and Mills, and Warren 77 are popular but haven't acquired the epically hip status of a certain nightclub past.  Could Tiny’s & the Bar Upstairs it help fill the void in current New York nightlife? Possibly.

Tiny's & The Bar Upstairs is located at 135 West Broadway.