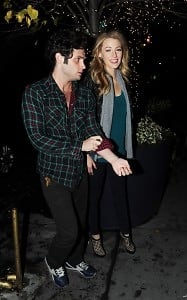 Blake Lively might have gone Staten Island during her SNL hosting gig this past weekend, but the her afterpary at the Meatpacking District's swell Abe & Arthur's was Manhattan all the way.

Lively had reason to celebrate. Let's be honest: her marble-mouthed performance as Serena

van der Woodsen on Gossip Girl will not be getting Emmy love anytime soon. But on SNL she did just about as well as you could expect her to given the limp material that has plagued the show all season. In that sense, she avoided the fate of January Jones, another pretty, but somewhat stiff blonde whose 30 Rock debut confirmed some fears that her cold, calculated work on Mad Men was less a product of the Stanislavski method than the natural rhythms of a cold, dull actress. Then again, her Saturday Night Live material was even weaker than Lively's, so we'll withhold judgment.

Anyway, you know you love her. XOXO. And all that jazz.