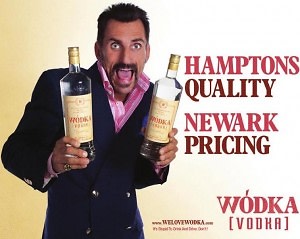 Wass Stevens, St. Peter to all who wish to enter Avenue, has another side project to compete with his acting career. It puts him on the side of a Times Square building as the face of Wodka Vodka. Enticing tagline: "Hamptons quality. Newark Pricing."

I can't verify the Hamptons quality. Mainly because I'm not sure the Hamptons can still be used as a barometer of good taste these days. But also because I haven't had the privilege of savoring the Polish brand. But at $11.99 a liter, there's little holding me back.

Note that $11.99 might buy you half of a single cocktail at Avenue. And try to forget that the going rate for bottles there is, what, $500? I can't say I've had the privilege of a 2000% markup on mediocre hooch either. Regardless, Wodka makes for a budget-minded consolation prize for the hapless masses who Wass turns away nightly at the 10th Avenue "gastrolounge."

Just don't eyeball this particular vodka. Unless you want to ruin your chances of ever seeing the hallowed innards of Avenue, or anything else again.