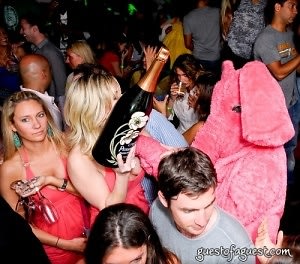 BREAKING: Pink Elephant, the nightclub on 27th street that has, for years, served as go-to place for satiating one's euro-trash desires, is undergoing some trouble in paradise. Breaking news today, after rumblings of rumors over the last couple of weeks: David Sarner and Bobby Montwaid (two of the five owners in PE) have officially been SERVED by Joey Morrisey. After Pink Elephant Southampton was plagued by bankruptcy filings this summer, it seems that there is never a dull moment in the life of these club owners. More on the lawsuit below...

Joey Morrisey, owner of M2 and Pink Elephant space, has accused Sarner and Montwaid of mismanagement and fraud, among other things. These two were also apparently involved in the South Hampton bankruptcy issues surrounding the nightclub out east.

The other three owners, Shawn Kolodny, David Cabo, and Rocco Ancarola have no involvement in this matter and are all staying on Team Pink. They will be keeping the present location on 27th street alive under their contract with Morrisey.

Their official 5th year anniversary will be on October 5, 2009.

We hope to be there, with or without David and Bobby.