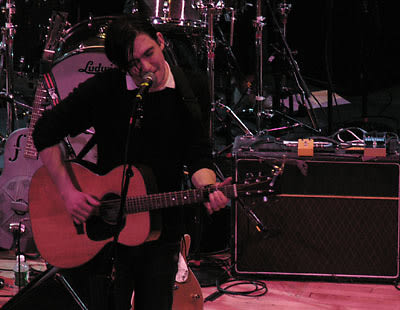 Conor Obrest is ending his ridiculous 2007 tour tomorrow night, after an insane 7 straight nights at Town Hall with Gilian Welch.  When you book seven nights at New York's famed Town Hall, you're bound to have some friends show up.  Some of the special guest performances have included: Lou Reed, Rilo Kiley's Jenny Lewis and Ben Kweller for guest turns, and Norah Jones and the Willies.

The NY Times reported that tickets to the shows were all sold out after only two weeks.  Mr. Oberst, 27, has a particularly obsessive fan base. “Many, many bands cannot do what Bright Eyes are doing,” John Moore, a partner in Bowery Presents, the promotion company that helped book the shows, said in an e-mail message.  The above picture is from Tuesday night's performance.