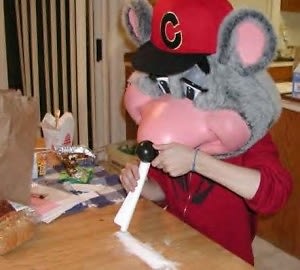 Times Square's Dave & Busters is a grownup Chuck E. Cheese. Patrons unleash their inner-child while blunting repressed childhood trauma with alcohol. But recreations of the kiddie party mecca have popped up in the city's hipper 'hoods, where irony cloaks Chuckie's inherent cheesiness.

Consider two recent developments in the Williamsburg bar scene. On Sunday the Times profiled Full Circle, a new arrival on Grand Street where drinkers can indulge their love of classic arcade game Skee-Ball. Proving that even the humblest retro pastimes can be gentrified, each game costs a buck. Which is only exorbitant considering Skee-Ball's addictive, maddening fun. As one player noted, "it’s not too scene-y here — or at least, it’s a different scene-y for this neighborhood.” Said another nostalgic budding member of the bar's Brewskee Ball league:

“I haven’t played this since third grade. I guess it’s in the wrists.” 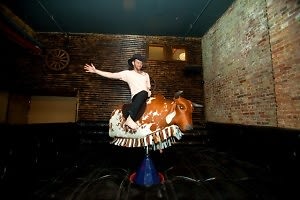 Speaking of, Williamsburg's more discerning and cultivated hipsters might want to slit their effete wrists when they discover Viva El Toro, a theme bar on Berry Street which features a mechanical bull, a contraption that outside its natural habitats south of the Mason-Dixon Line is less a test of boozed up masculinity than a frat bro magnet and harbinger of a neighborhood's complete gentrification. (See: Mason-Dixon on the Lower East Side.)

And as for questionable pies, sister bars Crocodile (in Gramercy) and Alligator Lounge (Williamsburg) have been serving complimentary mini-pizzas with drinks for years.

Do these joints play into the arrested developments of their young clienteles? Does drinking boost or hinder one's skee-ball skills? Could straddling a jerky mechanical bull lead to groin problems that would torpedo a one-night stand?

It seems people are having too much fun to care. These bars might be cheesy, but unlike at Chuckie's,  the gooey stuff on top of your free pizzas might resemble actual cheese.