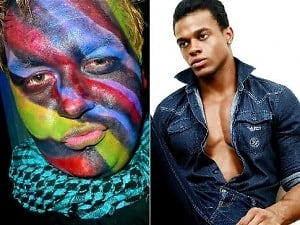 Gunshots. Stabbings. Overdoses. Nightclubs have never been for the faint of heart. But a recent spat in a midtown bar that ended with a drag queen biting off the ear of a male model shows that it's not just booming sound systems that put clubbers at risk of becoming faint of hearing.-

Gossip blogger and "flamboyant downtown club fixture" James Leahy (aka Jane Lane) is out on bail today after he chowed down on male model Ronnie Brown's lower lobe at Highbar earlier this week. If you've fully digested your lunch, you can check out the damage here. Details are hazy. Brown claims the altercation began when Leahy threw a drink in his face, which is a bold way to start a row rather than end one. Leahy says he was acting in self-defense after Brown began choking him.

Brown quickly defended himself, or tried to, on his Facebook page:

"I'd punch someone before chocking [sic] them."

Whatever provoked it, Leahy's cannibalistic outburst is hardly the first instance of a nightlife fixture behaving badly on his or her home turf. Other attention-grabbing stunts include PR princess Lizzie Grubman backing her SUV into a crowd of 16 people assembled outside Southampton's Conscience Point Inn (which she represented) and former hard-partying Giants wide receiver Plaxico Burress accidentally shooting himself in the thigh at LQ in midtown.

We'll keep our ears to the ground for further updates on the latest scandal.