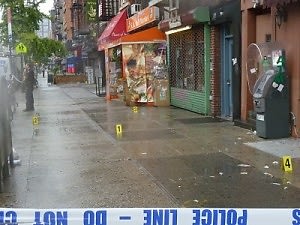 Two weeks after Devin Thompson, 37, died of gunshot wounds sustained outside the East Village's Sin Sin, the club's neighbors have beefed up efforts to close the venue, warning its owner that "the neighborhood will not rest until you are gone and Sin Sin's license is revoked."

Thompson was shot twice outside Sin Sin, on 2nd Avenue near 5th Street, on August 22nd at 4am. The victim and two suspects were believed to have been inside the club before the shooting. Thompson died on August 31st. DNAinfo's Patrick Hedlund reported that the ugly aftermath of the tragedy included passersby calling Sin Sin staff members "murderers" and "killers," the president of the East 5th Street Block Association patrolling the corner with a baseball bat, and owner Philip Quilter dissuading Thompson's family from setting up a temporary memorial outside his business for fear of the "negative attention" it would bring.

The memorial went up, but even if it hadn't, the backlash Quilter feared was inevitable. As chronicled by EVGrieve, Thompson's murder followed months of complaints from nearby residents who cited Sin Sin as a "notoriously bad neighbor" where fistfights were common. Just weeks before the shooting, the NYPD mediated a discussion between the club and neighbors.

Now a flier is circling the neighborhood urging residents to voice their concerns about Sin Sin to the local precinct and demand its help in either strictly policing or shutting down the venue.

East Villagers who feel their neighborhood has become overrun by louts and the bars that cater to them are a vocal and fiercely determined lot. Their gripes occasionally seem petty, overblown and deserving of light mockery. But as nightclubs seem to grow increasingly violent, it's time to consider the roots of the problem and do some weeding.