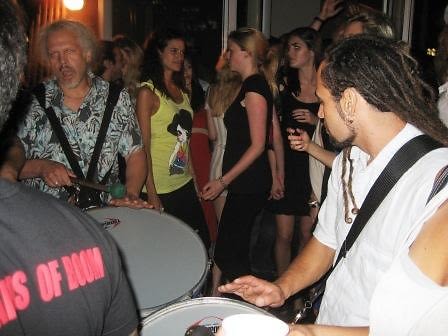 This Friday night we attended an exclusive party put on by F1 Racer Eddie Irvine for his good friend, Max Ferrari, who was in town from London.   The private party was in his posh Tribeca loft, a space that could very well be considered house-like, with 3 levels and over 6 balconies providing delicious views of the city (and making us feel like peons).  Known for his wild parties with megu money makers and models abound, Eddie is out to show the world that F1 Playboys really do have more fun..

As if the opulent food, bars, and pretty people weren't enough, Eddie hired a full on drum crew to walk around during the party as well as bagpipe players, presumably as a shotout to his native country.  It's hard being jealous of someone that shares his wealth in the form of parties such as these, and actually spent 5 minutes talking to us (he's nice).  Our consensus: Play on Playboy!!....(oh and please try and stock up on the champagne next time, you ran out at 1:30).