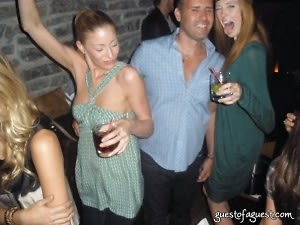 Being a bit crazed during Fashion Week, we really could not find the time to post.  So here's the Scott and Naeem Fashion Week Recap:

Monday: As you read on GOG previously,  we hosted a party at The Eldridge for Lydia Hearst.  We started our night at the Nigel Barker book party at the Soho Bloomingdales.  We then met Lydia for a pre-soiree dinner at Koi, where we were joined by Matt Levine, DJ Angelos Styliano and Dannity Kane's Aubrey O'Day.  As was reported the party was a huge success and fun for all in attendance.

Tuesday: found us at a hospital for a sick friend until nearly midnight.  After being in a hospital for that long, neither of us had it in us to make any fashion parties.

More from Scott and Naeem's Crazy Fashion Week below:

Wednesday: we met up with our friend, Fashion Director of Interview Magazine, Susan Kilkenny at Bottino's.  She had on her the newest copy of October's Interview Magazine and there we saw for the first time, our agency Artwing's full page ad.  We will share with GOG when it hits newsstands later next week.  We had a quick cocktail before heading over to Fabian Barron's book launch.  At the party we chatted with one of our favorites, photographer Peter Buckingham, shared a laugh (and elevator ride) with Terry Richardson and spotted the lovely new face of Calvin Klein, Eva Mendes. After checking out the tome we headed out the door to make it to our next party, the Carlos Miele after party.

The party was held at ESPASSO, the Brazilian furniture store in Tribeca. At the party we met up with another Interview staffer Marie LaFrance. We saw Carlos and his new wife and mother to be Renatta Castro, congratulated them both and headed to the bar.  After a couple Caipirinhas, we headed to Bungalow for our next stop.

Bungalow played host to Justin Giunta's jewelry collection for Subversive.  There we spoke with the designer and shared drinks with out Angels co-hosts Kristian Laliberte and Timo Weiland.

Our next stop was to be the John Varvatos shindig but continuing bad reviews from friends in attendance kept us away.  We headed to the Empire roof and we stayed only long enough to see the unlikely and sad sight of Lindsay Lohan sitting at a table alone behind 5 bodyguards. We wonder if Lindsay is being paid to attend all these parties her "friend" Samantha Ronson is spinning. Rather than contemplate unpleasantness we headed to the V Magazine party instead at the Mini Rooftop.

The rest of the night is a blur of faces, places, models and bottles.  We stopped at the Eldridge and ended our night as usual at 1OAK.

Thursday found us more tired and the worse for wear.  We did not really plan on attending anything else but then got a call from our friend, model Aimee Ruby. Aimee now makes London her home but was in town for two nights.  We met her and fellow model Alise Shoemaker at Merica for dinner and then decided to bring them to Eldridge to show them the space.

The Eldridge was hosting the Catherine Fulmer after party with hosts Kristian and Timo.  Inside we got a table, welcomed more friends, Ariana Ornela, Tyler Burrow, Derek Fears and Carrie Baker and chatted with the latest Ronson-It girl Annabelle Dexter-Jones.

After a little deliberation we thought it only fitting that our last stop on our Fashion Week was, you guessed it, 1OAK.  There Scott Sartriano welcomed us to his table and provided us with much (not) needed alcohol!

We toasted to the end and breathed a sigh of relief.  A great Fashion Week was had by all....