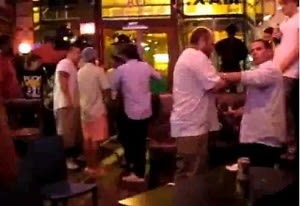 Max Fish may be on the East Side, but last night the scene inside the popular after-concert bar seemed right out of the wild wild West. Luckily, someone had the foresight to catch the brawl on tape!-

It was sort of hard to understand what was going on in this fight, but we gasped right along with the videographer when someone (?) slapped some other guy (?). No idea what was going on, but the tension was palpable.

Highlights of the video include:

The brilliant, off-camera commentary by some girl (again, ?). We feel her angst when she exclaims "Are you fucking kidding me?", and laughed when she asks "Is that my phone?!" during one of the more tense moments, and "Oh my god, Oh my god" repeatedly throughout.

The asshole who throws his chair INTO THE CROWD randomly at 0:58.

The guy in white who is literally lifted UP off the floor by some bigger guy, but keeps punching and kicking at the air.

The way that after the fight is over, even the people in the beer seem to have little to no idea of what actually just happened.

Were you at Max Fish when this all went down? What the hell happened? Does it really have something to do with tshirts?