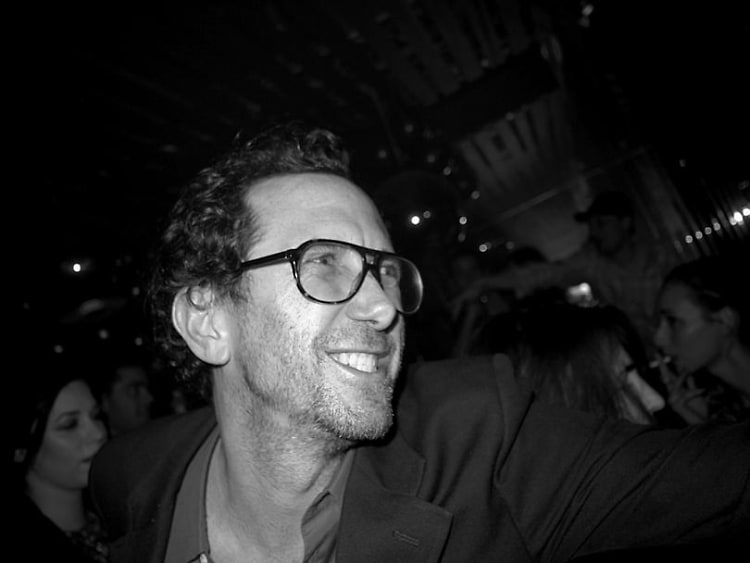 Below 14th Street, Travis Bass is a familiar face to the locals, downtown creatives, and nightlife regulars. Being a resident of Chinatown since 1998, Travis has done the event design for parties in the same neighborhood he calls home. He is known for New York-centric popup parties in converted Chinese restaurants, such as Madame Wong’s and Red Egg, that have attracted models and socialites. His new pop-up party, Inga, is at the space 141 Chrystie Street. To this event designer, inspiration comes from the retro, the glamorous, the cinematic, and the real.

Guest of a Guest met with Travis at the Bowery Hotel to discuss his latest pop up party, Inga. Over coffee and wine, Travis spoke enthusiastically about his projects and the things that keep New York and downtown nightlife authentic. [Travis Bass, Photo via Purple Diary]

Sitting across from Travis, it is easy to be overcome by the presence of the exciting way the city used to be. His large glasses and simple black T-shirt and jeans characterize Travis but don’t tell as extensive of a nightlife tale as his cultural knowledge. Travis jumps to reference Felini, Woody Allen, French New Wave, and Andy Warhol to describe feelings and ambiances. But it is his unpretentious appreciation of friends and fun that make Travis a part of what keeps New York real. Travis is the old New York, he is developing the New York of the future, and his projects and parties embody the brilliance as to why some of us moved here in the first place.

Your party last Friday at Inga was very dark and smokey.

When people go out at night, they want to lose themselves, lose their inhibitions, they wanna dance, forget about their worries, their troubles. In a perfect world, 4 hours pass and you don’t even notice. People walk in to Inga and they already feel like they are drunk. Now it’s a little darker because there are still things I want to improve --- and I don’t want people to see those things --- then when I do work on those things I can bring the lights up a little.

How do you begin to design a new space?

We are kind of like nomads, whenever we go into a new space, we bring our crowd and our party to the new space, and then we improve on the space. It’s a model throw back to the old days of Area, The Limelight, and The Tunnel, where they were always ever changing. What I like to do is paint, do art, hang things, change the light, do a new installation.

How did you come up with the idea of a pop-up party?

The advantage of doing the pop-up thing is that you don’t have this initial expense where you become a slave to cost. The concept came from being in Berlin. The energy was so raw and unpretentious, and what was so cool was that there was no pretension of over design and over spenditure of money. It’s the opposite of Vegas --- the ultimate fake reality, and in Berlin, they open a bar for $6,000. So, when I did Madame Wong’s, I spent $6,000. The concept was I was sitting in Kreuzberg at this cool little bar with this weird western stuff and a broken juke box, and that’s what’s so cool about it, they got stuff off the street and for cheap and made it artsy without spending any money. So this pop-up thing, a) I don’t spend any money. I am not in debt and have to pay back investors and let people in because I want their money. And b) it makes place more real and the crowd is better. 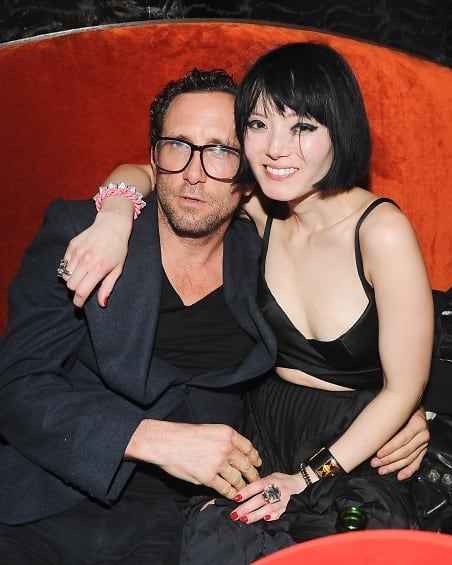 Besides bars in Berlin, where else do you get your inspiration?

I am kind of a movie fanatic. Last night I was watching Le Plaisir by Max Ophüls and it’s about an old, Moulin Rouge era, Paris in 1920s. I generally watch Felini films or French New Wave films, and even when I did interiors, you always want to reference an era. For example, Madame Wong’s was a reference to old New York, which is so similar to Berlin, where rent is cheap and artists are having fun. It was trying to be the Warhol, Basquiat era of New York. Then Red Egg was me trying to take it to the next level and trying to get it to the Boom Boom. My friends who liked Boom Boom didn’t like Madame Wong’s, they thought it was too raw. I wanted it to be both glamorous and raw. I always use this reference for Red Egg --- it’s like a Roxy Music album cover. It needs to have the feeling of a Negel painting, it needs to have the sexy glamour of the American Gigolo era. It always needs to change. People try to recreate Beatrice so much. But in the end, people already went to Beatrice. What are people ready for now?

What is the post-Beatrice era?

Beatrice was very unpretentious. They didn’t spend a lot of money decorating. They opened with very low overhead and did not flinch on an uptight door policy and let bad people in to pay off their debt. It was the ‘eff-off’ to this whole ‘buy your way into a VIP’, which is not VIP. Real definition VIP, you can’t buy your way in. Andy Warhol did not have to buy bottles to sit in a VIP area. They helped bring New York back to a better place. Now there’s two scenes, Meatpacking and the downtown post Beatrice scene. At least there’s two, where before there was only one.

How do you describe GP (General Public)?

I generally don’t like giant crowds. My clubs are more like coming into my house. Between me and Vance [Brooking], who does my door, and May Kwok, who DJ’s for me, we probably know 75% of the people in the room. So then we are 1 degree of separation from every body. It makes sense. We are throwing a party for our friends to come hang out and meet new friends. It’s like Facebook in a club sense. General public to me is more like clubs that are a business, clubs that only collect money.

How did you come up with the idea for Inga?

When they opened White Slab, I’ve known Annika [Sundvik] and them forever. They had this back room that they didn’t know what to do with. I wasn’t planning on doing all these parties at first. What I’ve been doing for the past 17 years is private and corporate event design and production. When the recession came, it was very taboo to do events. My best friend, Magnus Berger, who does Last Magazine, said, “why don’t you do a party in the backroom here at White Slab, why don’t you just do it for fun?” He DJ’d with my friend Zara Zachrisson and they were both Swedish and it was a Swedish bar, I thought of the most typical name, “Inga”. I thought Inga was a very Swedish name, like, [accent] “Inga from Sweden”. So we did these parties, “Inga goes here, Inga goes swimming, Inga goes to Brazil”. That led to parties at Pravda called “Excusez-moi” and that led to Madame Wong’s, and that led to Red Egg, and this is leading to Inga. I brought it back to Inga because it was always such a dance party.

Was Inga meant to just be a pop-up while Red Egg is being renovated?

Now it’s about me not having any weaknesses. Last weekend I felt like there was no area to lounge. So we built this lounge area. And Saturday night we are doing a upstairs karaoke floor. We are doing a big party for Maccarone. We have Physical Therapy, and Greg K from Misshapes, doing the upstairs. And downstairs we have the Underground Resistance, a DJ collective from Detroit. It’s more about evolving the space in to making sure it is as interesting and multi dimensional as possible. 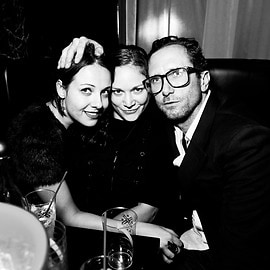 The alumni of Beatrice. The Inga crowd is basically this: an ideal crowd is a mix of all types of people. This is why we live in New York. Because it’s a melting pot of all types of people coming together. There’s going to be a couple of actors, a couple of bankers, a couple of fashion people, some art people, young people, old people, straight people, gay people, and you put them in a room, and they start dancing together, that’s what we love about New York. That’s why we live here.

Who are the DJs at Inga?

The main DJs are May Kwok, Florencia Galarza, Franco V (who DJ’d Beatrice), Zara Zachrisson. May Kwok has been with me since day one at Madame Wong’s. May is almost like a partner in the sense that the main people who helped me since Madame Wong’s are Vance Brooking and May Kwok. May is more than a DJ. She has helped book so many amazing events. She is such a huge face of what I do. Vance is basically the ultimate dream come true person. He is adorable. Everyone is in love with him.

Do you have plans for summer parties?

We are working to do something on the roof (of 141 Chrystie). We are talking to Franco V about doing BBQ. I think it's going to be the summer dance party of 2012.

What are your favorite nightlife spots?

I like going to all the spots. I go to Le Baron, Boom Boom, The Jane, Lit, Café Select. But really, my favorite spot at night, when I’m not working, is The Carlyle Hotel. I really like old school bars and jazz clubs. I like to escape to the Upper East Side because I don’t know anybody. It’s nice to get away. It’s like taking a trip to Paris. 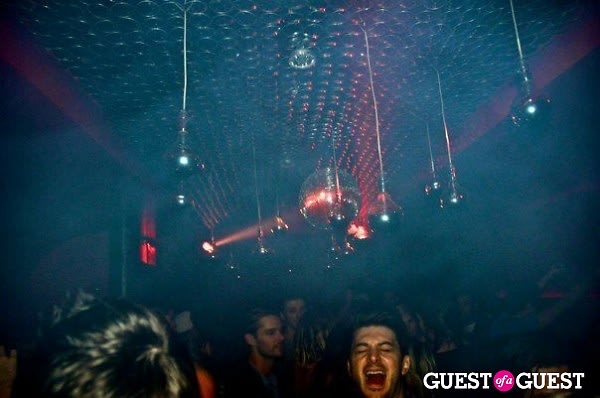 Escapism. In one night I must give out 100 hugs. Nightlife is very loving. Everybody is really close. Everyone is celebrating. You don’t want to stress. You want to hang and dance. It’s very carnal in a way. We live in a city with a lot of reality. It’s a very expensive city. There is a lot of stress and work. At night time it is that ritualistic and animalistic time where you can dance and hug and jump around and be like a kid again.

And when does a party get too out of control?

You have to know the flow. If it becomes too congested, and people get pushed too much, to the point where it’s no fun, that’s when people get aggressive. But at our parties, it’s usually some queen slapping another queen. We don’t really have a tough crowd. No one does anything. Our crowd is pretty civilized. We know everyone who goes inside. We know who the bad boys and bad girls are because they are our friends. So we keep an eye on them.