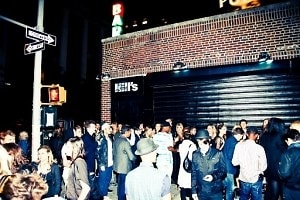 Not entirely unexpected for a club that has been getting this much attention, but we've started to hear some murmors of what might be the beginning of a Don Hill's backlash. So what are the complaints, so far?-

"Have you ever wondered what it would feel like to be a piece of chicken cooking inside a George Foreman grill?"

"Hot, hemmed in from every side, suddenly flipped around by forces beyond your control or comprehension."

Sounds intense, but it's not like the scenesters at these parties aren't used to crowded hotspots. The cool factor of seeing Iggy Pop or Courtney at Don Hill's is worth it, right?

Maybe not. Derek Blasberg, no stranger to it-parties not only on this continent but in Europe as well, tweets:

"This Don Hill's place, even for a Proenza Schouler afterparty, is a lot to handle. Even for me."

And of course there are the vociferous fans of the old Don Hill's, pre-Nur and Paul, when everyone knew Don himself and there wasn't a line out the door to get in. But Don Hill's, even in its new incarnation, doesn't seem like the typical Boom Boom-esque haven for the industry girls who usually make up most of New York's party scene.

"It's not the Beatrice Inn, as some are saying. And for a girl who totters around, overdressed in 5 inch heels, like myself, it's not for every night.",

says Carson Griffith of The Daily News. So what is every night, for her?

"Boom Boom, Le Bain...Don Hill's has the best music in the city though right now-Rose Bar has great music too though, so I'm not surprised. It's definitely going to become an "it" spot, with an endless line, and one of the tightest doors in town, as it's different from anything out there."

But the true experts are succinct on the subject, and all-encompassing in their praise. Steve Lewis writes,