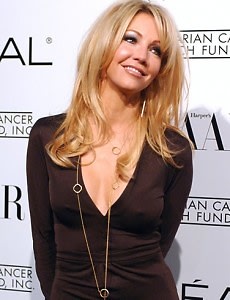 Perhaps there is a large silver lining to Heather Locklear's recent DUI arrest. Enter John "JE" Englebert, owner of Suzy Wong's and Prime, serial nightlife press releaser, and former Peter Gatien drone.  Perhaps you remember Englebert back in August when he came to the "rescue" of Asian waitresses who were supposedly fired from shady club 1 oak for being, well Asian.   Englebert issued a press release offering to hire the girls, however, there was a fly in the ointment.  One of the girls had already worked for him at Suzy Wong's and had left because Englebert withheld tips.

So moving right along, Englebert is now at it again, talking out of both sides of his mouth and issuing a press release that announces the creation of a new Locklear-inspired group that calls themselves "NYC Night Clubs Against Bottle Service (NABC)." Their mission is a "crusade to end alcohol abuse in NYC nightclubs".  Whether FACT or FICTION, this is perhaps a larger threat to bottle service than the financial crisis!

"John JE Englebert is reaching out to nightclubs and lounges across the Big Apple to put an end to bottle service which contributes to high abuse of alcohol in the city that never sleeps.  The recent DWI arrest of actress Heather Locklear has inspired Mr Englebert a former friend of Locklear..."

We have long bemoaned the bottle culture of NYC, not only because of the financial excesses but also the safety ramifications.  Let's be honest, shoving 3 bottles down the throats of 6 patrons is simply not a good idea no matter what the circumstances.  The fine line of pushing profits versus safety has been crossed too many times.  Its irresponsible, not only for patrons on the receiving end, but it also jeopardizes the livelihood of those clubs that practice responsible bottle service and offer it as a "convenience to patrons" not as a means of highway robbery.

Sometimes bottle service can equal the rent of a small studio apartment in New York City.  Most clubs even make customers buy a 3 to 4 bottle minimum to get in...If a customer doesn't make it home because of driving while intoxicated then the sestablishment usually is partially responsible

So John, even though you were probably selling bottles as you wrote this press release, and you may very well be a bit off your rocker, (we thought we'd never say this), but we couldn't agree with you more.