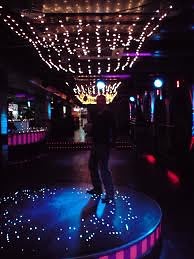 What is the sound of one hand clapping? Lavo might answer the zen koan tomorrow, when Tiesto, one of the world's top DJs, plays the "intimate, cutting edge" midtown club. What could be considered a coup for venue and artist has stirred a mini-revolt among Tiesto fans, few of whom will witness the set.

There are no real enemies in this head scratcher of a booking. Tiesto is an internationally known, if not universally respected, DJ who would relish the chance to play a smaller, heat seeking NYC boîte.

And Lavo is branching out with the invite, since the music at "clubs" of its ilk--its co-owners also run bottle service see and be seen places like Marquee, Tao and Avenue--tends to be the nightlife equivalent of elevator muzak, an ambient background hum to conspicuous consumption and posing stiffly for that umpteenth photograph meant to suggest the subject is having a blast while preventing him or her from doing so.

So who loses out tomorrow night? People who have actually heard of Tiesto but won't or can't buy a $1,500 bottle of $50 liquor to hear him. Says one fuming commenter on electronic dance music website Resident Advisor:

"...as a new venue you should know that what works in Vegas does not work in new york!!! ...You cant's false advertise an event in new york saying that it's $20 dollars to get in and not tell people that it's a strict dress code that u have to wear a suit and have a number of 6 people to get in!!!! Who the hell does that !!!!! ...what's so funny is you guys booked the number 1 dj in the world tiesto and say it's 20 to get in online but when u get their it's free to get in but you have to buy a bottle that is 1500 dollars to get in and u need to wear a suit..."

And a more sedate criticism:

"Shitty bottle service place that will be spinning top 40 and hip hop by year end once they remember that the shitty crowd they do attract prefers Kayne."

"is anybody going? i sooo badly want to but i dunno if that's my scene"

Who knows? Just because someone is willing to shell out big bucks for a night on the town doesn't mean he's ignorant of, or immune to, Tiesto's musical charms. (Although one fan who claims to have spoken with Lavo staffers says they booked Tiesto without knowing who he was, only that he was "big.") Lavo might throw "true" fans a bone and diversify their crowd a bit. If not, the EDM faithful have the usual downtown and Brooklyn clubs and underground parties to fall back on.

But it looks like the Tiesto booking at Lavo has exposed the chasm between Manhattan's corporate mainstream nightlife and the more traditional, democratic and music-driven party culture that still somehow thrives in its shadow. Caught in the middle is Tiesto, whose stadium-sized popularity and unfashionable trance sound turns off more cultivated techno aficionados while remaining unknown to Lavo's typically older and even more mainstream habitues.

With luck, Tiesto will entrance the Lavo crowd tomorrow without anyone, including the DJ, falling asleep.