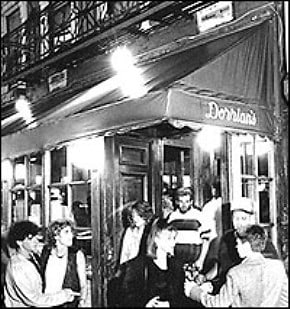 We could never begin to count the number of times we've witnessed underage drinking in this city. Butter, Bungalow 8, Cipriani's, Stereo, Tenjune, Lotus, Cielo, Pacha, Marquee, Cain, and Scores just to name a few. Jesus if we could even begin to guess the times we've had to watch one of those tiny Olsen's and their entourage settle themselves into the newest hotspot or old favorite...Today, the Lohans, Olsens and Duffs of the world can breathe a sigh of relief as they are FINALLY of legal age (not that it ever stopped them from partying in the past), but today's Post is warning that the "Party's Over!" for all of those other underaged famous tweens looking to party in Manhattan this Holiday Season.

Apparently the SLA (State Liquor Authority) Agency is "paying close attention to city hot spots that lift their velvet ropes for tween stares in the hopes of attracting press and crowds for their clubs." Last year they revoked 108 liquor licenses alone. While many famous NY party goers like the Olsens have moved on to more "mature" venues such as Socialista, Beatrice, Rose Bar, and the Box, places like Bar Martignetti's better switch their focus...and fast. We have started to form a little crush on this place, and one that we would like to keep.  Which is why we don't want it inundated by underage kids that may result in it's closure.  Either 21 isn't what it used to be, or we have never witnessed more underagers in one spot than we did last Wednesday (the night before Thanksgiving) downstairs at Bar Mart's. Seriously, it was fucking ridiculous. We know that you want to let all your underage little social-diva's, home from Georgetown and Trinity for the holidays, into the bar for some harmless fun, but come on! They aren't even famous! Sure they provide some fun, naive eye candy, but besides worrying about losing that last liquor license in Soho that you worked so hard for, the Martignetti brothers are on a path ala Jack Dorrian.

Bar Mart's has been repeatedly described as the downtown version of Dorrian's, and most may see that as a good thing. However, Jack Dorrian, the guy that ran the famous UES prep bar that bore his name "Dorrian's Red Hand" knows all too well the dangers of letting underage kids with money into your bar. We don't think anyone needs another refresher course on the preppie idiot/murderer Robert Chambers. Ironically Jack Dorrian had a son that we all knew well who was in charge of last years hot prep spot "The Falls" which unfortunately fell to the SAME EXACT fate of his father. History has proven that 16 year olds can't handle their alcohol, so please work harder on keeping them out!!! If not to cover your own ass, how about so all the rest of us going through our mid 20 year old blues can act like silly underagers without actually having to run elbows next to the boogers. We love you guys, and want to continue to not "STOP BELIEVING" with Journey for years to come!  Thanks, gofg.