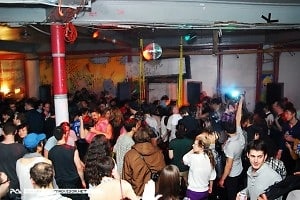 As 15,000 people schlepped via ferry to Governors Island for the much-hyped Hard NYC on Saturday, a couple hundred of the dance happy opted for the Mister Saturday Night hoedown in a Bushwick alleyway. Thundershowers rained on both parades. But it was Mister Saturday Night that showed how NYC nightlife can weather a storm.

It has been a wretched season for semi-alternative partying in New York. Sunday Best, the popular tea party thrown by Eamon Harkin and Justin Carter, lost its base at BKLYN Yard along the Gowanus. The Blkmarket boys closed down their Independence Day wingding thanks to a nearby domestic dispute. Last week cops raided arts space and sometimes-party zone Rubulad.

Mister Saturday Night (also organized by resident DJs Harkin and Carter) faced similar troubles to Rubulad when the police shuttered Market Hotel (picture above, in happier times), its DIY headquarters, back in April. Although these parties refuse to go quietly, they've been forced into a more nomadic and tenuous existence than even their diehard fans, who perk up at going off the grid, can comfortably stomach.

Still, Mister Saturday Night made the best of its new home in the alley off studio/cafe/bar Brooklyn Fireproof for five shows, the last of which was Saturday. Curiously, Brooklyn Fireproof welcomed the Mister/Best crew after apparently giving the boot to Blkmarket, which until recently threw most of its after hours dance marathons in The Nut Roaster, a sprawling film & TV soundstage across the street from Fireproof's bar and what it charitably calls a courtyard.

This might be the price a venue pays for respectability (cupcakes, tempeh melts and homemade granola dot the menu) and unquestioned legality (MSN called it quits at the amateur hour of 3am during its Fireproof stay). Which isn't to say it let guests down.

A solid crowd let loose in the alley on Saturday. They hooted, hollered and whistled to the crescendo of housey beats from Carter, Harkin and guest spinner Chez Damier, capping it off with the customary foot-stomp and hand wave--don't call it a fist pump--when the slow build erupted and the beat peaked or was, as they say, dropped.

After the drizzle turned to rain, Carter announced it'd become too dangerous to continue Harkin's set. But the storm only energized the crowd, who lost their inhibitions (and more than a few shirts) as they enjoyed some drunkenly choreographed puddle jumping.

After a 15-minute huddle inside the bar, the alley exploded again.

Damier triggered a warm, fuzzy flashback to the PLUR days when he cut the music and instructed everyone to embrace a stranger:

It was a show of unity common to this sort of party. If only the city would share in the love.