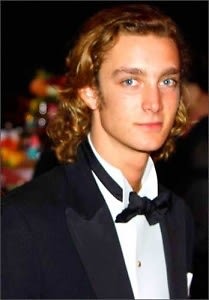 It was a "blue blood"-y night at Double Seven, Manhattan's Meatpacking hotspot, when Prince of Monaco Pierre Casiraghi was hospitalized after a brawl broke out over vodka and supermodels.

According to the New York Post, Casiraghi, grandson of the late Grace Kelly, was assaulted by former club owner Adam Hock when the prince and his entourage, among them Greek shipping heir Stavros Niarchos III, approached his table.  What happened after is a point of contention between the two parties.

Members of Hock’s group said the prince and his entourage “were being completely obnoxious,’’ insulting the models and swigging from a $500 bottle of vodka on Hock’s table.

“The next thing I saw, all hell broke loose,’’ one witness said.

Hock, a former Rutgers football player, sent Casiraghi to the ground with a single punch, before landing a few on Niarchos, Vladimir Restoin Roitfeld (son of Vogue alum Carine Roitfeld) and Diego Marroquin. Flustered models, among them Natasha Poly, Valentina Zalyaeva and Anja Rubik, tried to break up the melee, and someone attempted to hit Hock over the head with a bottle of Grey Goose before the police were called. (Did they dial 'M' for Meatpacking?)

Hock, now charged with four counts of assault, claims he was acting in self defense, while Casiraghi and his party maintain that the attack was unprovoked.  So who to believe, the prince or the popper?  We can't wait to see how this grim fairytale unfolds!

UPDATE: As reported by the NY Daily News, Jessica Hart, model girlfriend of Stavros Niarchos, has taken to twitter in her boyfriend's defense, calling Adam Hock a liar running to the press. “Ha!” Hart tweeted. “It’s going to be so pleasurable when the truth does come out and he’s exposed as the freaky liar he is.”

Although Casiraghi and co. have been advised by their lawyers to remain silent at this point, they released this statement:

"The facts speak for themselves" said a spokesperson. "There was only one person arrested Friday night at the Double Seven, Mr. Hock, who spent two days in jail as a result from his actions. We have no further comments."