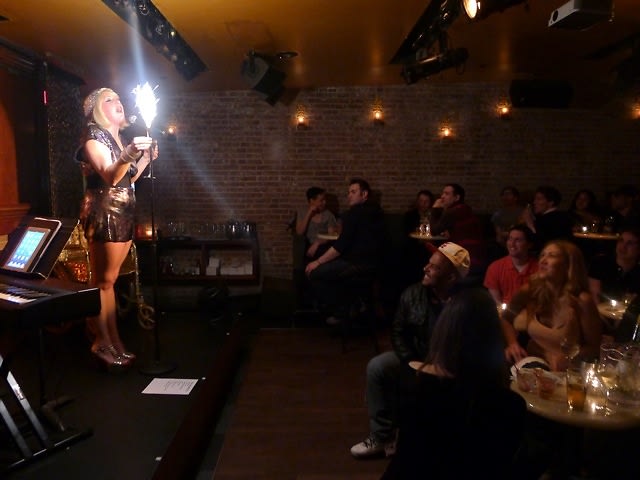 Midnight on a Tuesday, and Natalie Joy Johnson was reclining in a golden wheelchair, sunglassed and sequined, delivering an impassioned rendition of Adele's "Someone Like You." "This one's for mama," the chanteuse prefaced, gesturing to her mother, who was indeed sitting in one of the packed booths lining the upstairs lounge of Therapy, a Hell's Kitchen bar renowned for its live entertainment.

But Ms. Johnson, who would call this number a "wheelchair ballad," is a standout among the bar's weekly lineup.  Her brassy, powerhouse voice has belted both off and on Broadway, and her resume boasts such impressive credentials as Legally Blonde and Bare: A Pop Opera. 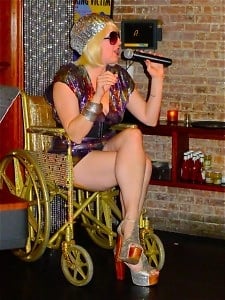 Her experienced chops, combined with masterful piano accompaniment by her Musical Director, Brian Nash, never fails to bring the house down. Heralded not merely for covering pop songs like Adele's, Ms. Johnson re-imagines them with all the guts and glamour of a Broadway spectacle stirred with the irreverent, comedic sass of a drag show.

For Johnson, who often references her personal life, no material is off limits. For instance, after recounting the story of her first menstruation cycle, the singer segued into a medley of songs including Britney Spears' "I'm Not A Not A Girl, Not yet A Woman," Leona Lewis' "Bleeding Love," and the theme from Ragtime.  Clever and crass, the act elicited laughter and applause from the audience. In past shows, Johnson has shared stories ranging from the theft of her purse to the contraction of a venereal disease, all to the same positive response.

"What Brian and I are doing hasn't been done before," she confided after the show.  "In cabaret, that's something special." 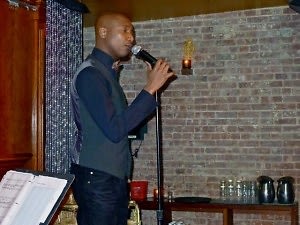 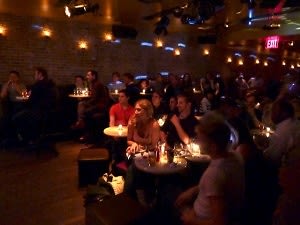 And "something special" is exactly what cabaret needs.  Old standards such as the Oak Room, the Pierre Hotel, the Four Seasons, and the Rainbow Room have closed their doors to the once-celebrated field.

In order to survive, the act is changing, and singers like Ms. Johnson, who combine contemporary with classic, are rising stars in the center of it.  In 2011 she was ranked among the best New York cabaret performances by TimeOut Magazine, a list moving away from jazz standards to shows like Barb Jungr's covers of Bob Dylan at Metropolitan Room, Dina Martina's drag show at Laurie Beechman Theatre, and Justin Sayre's variety show at the Duplex.

As Ms. Johnson would sing, in a Pink song that has become one of her standards: "So raise a glass if you are wrong, in all the right ways."