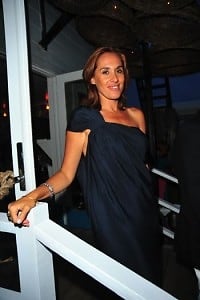 Not a bottle service club Avenue celebrated its first birthday on Wednesday night. Veteran nightlife chronicler Steve Lewis was there to toast the joint's past but walked away with a scoop about its future: Jayma Cardoso, of Goldbar, Surf Lodge and Cain might leave that club empire for Avenue's.

For years Cardoso has worked with Jamie Mulholland to open some of the premiere fancy pants venues in the city and the Hamptons. As Lewis points out, Cardoso's "clientele is vast, with a large following of South Americans and Euros. She is adept at training staff and bringing other waitrons with rich followings to the tables."

So basically this would auger that the rich at Avenue (like co-owners Noah Tepperberg and Jason Strauss, also of Marquee and Tao) would get richer. But Mulholland and his venues won't be on skid row anytime soon. When Lewis asked Cardoso about the fates of Goldbar and Surd Lodge, she assured him that she's "still going to take care of [her] babies.”

“We will, of course, always be close friends as we concentrate on our own things. We all have our own decisions to make.”

Speaking of diplomacy and teamwork. Lewis also discusses some of the intricacies of the bottle-service business. Most interestingly,and kinda infuriatingly, he notes that waitresses at high-end nightclubs can individually take home thousands of dollars a night through pooled tips. The key is having no dead weight on the staff that might threaten the bottom line.

And that is why Cardoso's skill at hiring, training and maintaining the top bottle girls (don't you wonder what qualifies one as a top bottle dispenser?) makes her a fixture in the nightlife community, wherever she lands.