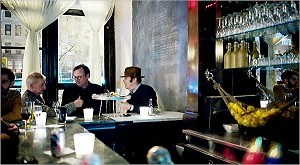 The Times found a L.E.S. bar devoid of Jersey, Staten Island and German riffraff! How to preserve White Slab Palace as a haven (even on Saturdays!) for locals sick of interloping Weekend Warriors? By avoiding a Styles write-up, for one.

Ravi Somaiya writes in his review of the Delancey Street newcomer:

"The Lower East Side has become a destination for those from other boroughs, other towns and other nations who seek a few hours of Manhattan life. On a recent Saturday night, on Rivington Street between Essex and Ludlow, it was easy to find people from Queens, Brooklyn, Staten Island, England and Germany. It was harder to find a local resident."

It's an all-too-accurate assessment, though at this point coming up with a Manhattan neighborhood that didn't fit this bill would be a challenge. (Wipe the smug off you're face Williamsburg--you're just as bad.)

But the obvious, eternal dilemma with the Styles section shedding light on a blissfully obscure gem is that it attracts the kind of crowd whose absence helped make the place great. As far as bad omens go for local joints like White Slab, a fawning Times piece might not be in the same league as a Sex and the City mention (see: double decker buses idling outside of Magnolia, penis-hatted bachelorette parties monopolizing once-slightly edgy Lucky Cheng's), but can still have an unfortunate, (presumably) undesired effect.

Then again, celebrities might have been the first to blow White Slab's cover:

"The Olsen twins, Kanye West and David Schwimmer have been spotted in recent weeks. 'It’s like going back in time 10 years — the music, the people, the atmosphere,' said Leonidas Bieri, a documentary filmmaker."

Which makes you wonder: who could possibly want to go back in time 10 years more than David Schwimmer?

Anyway, White Slab is a solid place despite some heavy-on-the-'tude bartenders and a comically small dance floor in its "secret" backroom saloon. Still, they get good DJs and, being a Scandinavian bar, it allows patrons the chance to ogle some fine-looking Swedes (hence the 'tudes, perhaps).