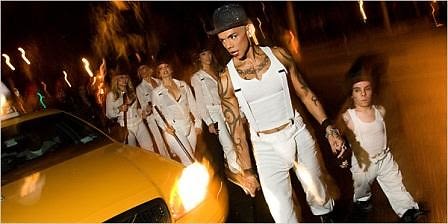 [photo from the New York Times]

In this weekend's Sunday Styles Section of the Times, there was an interesting article questioning the relevency of the popular club The Box.  Titled "Is the Box Still Edgy", it did a pretty poor job of presenting us with any new information, but we read along anyway.  Here's what we took away:

-After 10 months, The Box may be becoming somewhat like 27th street, warning signs include but aren't limited to the line of cabs at the end of a night and the random nobodies asking if they had in fact reached "the box" to the doorman.  Although Lydia Hearst seems to still be going so it may have a little more time left.

-The DOH (Department of Heath) and police have done the routine "raids" here and there like usual, and a business affiliate was arrested for drug distribution (news that WE broke HERE)...Typical stuff so far.

-Their latest "find" is Kenichi, a Japanese dancer discovered at the Apollo, though Hammerstein admits that it's hard to keep things fresh saying "It's pretty much the bane of our existence, trying to find new acts" (at least he's honest).

-People are getting so "overstimulated that it's hard to be impressed."  (admitedly no one needs to see midget Britney twice).

So is The Box, described by the Times as: "Originally billed as a Moulin Rouge-style theater of the extreme, the Box has mostly settled into its role as a purveyor of kitschy, Las Vegas-style exotica and extremely pricey drinks" really past it's prime....or will the "one constant staple" of female nudity keep the A-list crowd coming back for more?  Who said over-stimulation was such a BAD thing anyway?