Palladium, that little nightclub on 14th street owned by Steve Rubell may have closed in '98, but palladium, the rare silver-white metal that the club stole its name from is making a comeback. Discovered in 1803 and named after the asteroid Pallas, which was so named after the epithet of the Greek goddess Athena, Palladium is becoming the new platinum in a discouraging market. "Getting married is a big commitment, and so is shelling out two months salary for an engagement ring." [abc news].

Palladium is visually indistinguishable from platinum, and at 1/3 the price, it makes sense that many of our Wall Streeters will be investing in this lower cost metal.

Not to add insult to injury, but speaking of unaffordable possessions, miners in the southern African kingdom of Lesotho found one of the world's largest diamonds, a near-flawless white gem weighing 500 carats on Sunday. 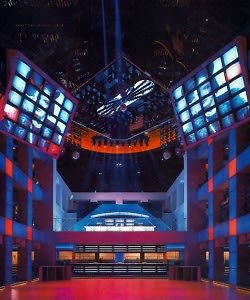 FYI: Palladium nightclub is considered to be "the greatest club of our times", at least according to anyone living in NYC in the 90's. It was sold to NYU and was demolished. It is currently the "Palladium Hall" dorm and rumor has it, that the students develop a fondness for Deee-lite within months of living within it's walls.