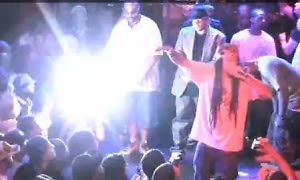 Fans of the group claimed that although the show was overcrowded, it was peaceful before the cops showed up.  Though the exact details of what transpired are a little blurred, NYPD responded to a call placed by the club's security a little after midnight and allegedly entered the venue in hopes of clearing out some unruly patrons.  After turning to pepper spray, the ultimate-drunk-crowd and police brawl catalyst, the crowd became even more unruly.

The Lo-Down describes the scene:

Amid the chaos, six patrons were arrested and charged with various offenses, including disorderly conduct, assaulting an officer and inciting a riot, DCPI reports. In addition to the broken tooth, at least five officers sustained injuries that included a broken nose and cuts. The DCPI report did not specify injuries sustained by those taken into police custody, but witnesses said at least one of the bar-goers who tangled with police was injured and remained hospitalized this morning.

Many party goers are citing police brutality and asking for witnesses to come forward and file complaints with the police review board. Get the rest of the story at the Lo-Down.