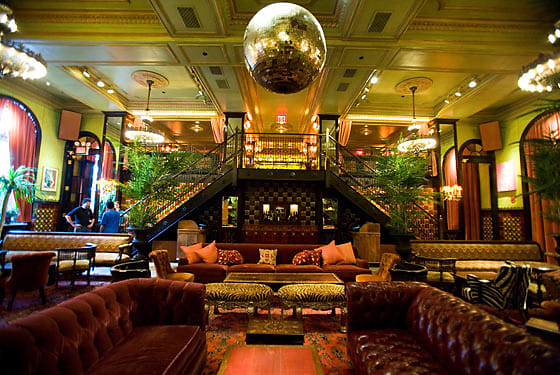 [The Jane Ballroom via]

UPDATE: Got something to say about Jane? Go HERE!

Think you're cool because you were at the same party as Dree Hemingway? Think again. If you are ANYONE in this town, you are going to hang out with Jane. She's cool, she's hip, and she confidently holds her head way above the rest of the crowd. Jane has quickly become the talk of the town. Her friends are superstars, (but not the ones that need ego stroking), and her taste in music is brilliantly refined. She doesn't care if you're done up or down, she just wants you to be....interesting...and she is here to save us all.

Okay this is a bold statement to be making. But I'm. not. alone. And, let's face it, the fact that I've been to the Jane Ballroom twice this week is reason enough for you to believe me. This place is hot.

Late to the game? Perhaps. The Hotel boasting the $99 rooms opened in January. I did visit the place once when it first opened, and brushed it off the next day. But lately, the steam coming out of 113 Jane Street is heating up the West Village, and many a gofg reader. The resounding question of the night last night was why in the world we hadn't covered the place more. (It's not like we've ignored it guys). But I get it. Jane deserves some shilling.

I don't care if this makes me a "wannabe Midwesterner" or a "Enthusiastic idiot." I will go on record saying that NYC nightlife is becoming a lot more interesting, and Jane is absolutely a factor.

I think Simko sums it up nicely:

"I’m not sure why (assumably because of the potted plants, balcony, lack of light and crowd) but the Jane Hotel’s Ballroom is starting to really remind me of Bungalow 8 during its heyday. I suppose that the comparison is even more appropriate given the Ballroom’s close proximity to Armin Amiri (former gatekeeper of Bungalow)’s now-closed Socialista spot. If you ever have the opportunity to go, I highly suggest that you check it out…"

Email me telling me why I'm stupid, why this isn't a well executed venue, (the owners have had some practice), and why I am a total wannabe without a life. Because maybe I am just drinking the koolaid...

But the unpretentious Jane has won me over, (I waited patiently to get in to the spot both times with a gentlemanly doorman overseeing the gates); and that's something to get excited about.

A plain Jane, this one is not.